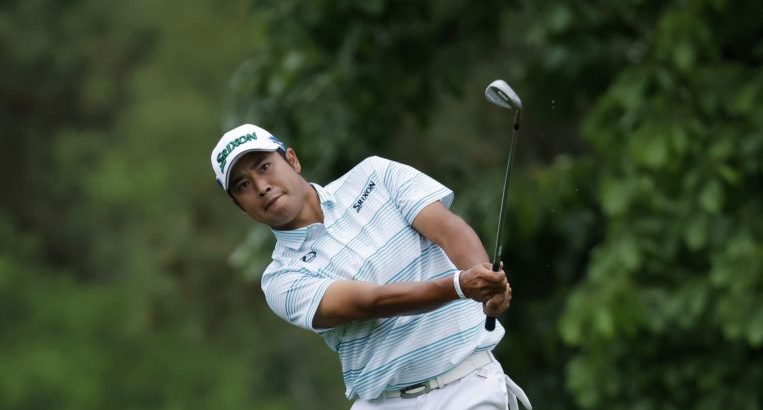 AUGUSTA (REUTERS) – Four years since he last raised a trophy and in his 10th appearance at the Masters, Japan’s Hideki Matsuyama moved into position for his first Major title with a late charge at Augusta National on Saturday (April 10).

In fact, no native of Japan has ever won a men’s major golf tournament, with Matsuyama in position to be the first with a four-shot lead at 11-under 205 heading into Sunday’s final round.

His seven-under 65 was the best round of the day by three shots.

England’s Justin Rose, the leader after the first two rounds, was in a group of four in second place at seven under after shooting an even-par 72.

Xander Schauffele (68), Will Zalatoris (71) and Australia’s Marc Leishman (70) also were at seven under and in position to make a charge if Matsuyama falters.

Another shot back at six under and in sixth place was Canada’s Corey Conners (68), who had a hole-in-one at the sixth hole in the third round.

Alone in seventh at five under was 2015 champion Jordan Spieth, who had to scramble for a 72.

A five-time winner on the PGA Tour and a 14-time winner worldwide, Matsuyama has not finished on top since 2017. In the third round of the first Major of 2021, though, he hardly looked like somebody who forgot what it takes to win.

“It’s going to be a new experience for me, being a leader going into the final round in a Major,” he said through an interpreter during the CBS broadcast. “I guess all I can do is to just relax the best I can tonight, prepare well and just do my best (on Sunday).”

The 29-year-old was the Low Amateur at the Masters in 2011, so his familiarity with Augusta’s challenges is rich. His best finish was fifth place in 2015.

After manoeuvring through the course’s menacing opening six holes at even par, he recorded his first birdie at the par-four seventh hole with a five-foot birdie putt. He was at five under for the tournament when he made the turn to the back nine.

After returning from the 77-minute weather delay, his back-nine charge started at No. 11 with a birdie. He followed that with another birdie at No. 12 to move to seven under and into a tie for the lead with Rose.

The stakes were raised just a few holes later.

Seconds after Rose moved into sole possession of the lead at eight under with a 27-foot birdie putt at No. 12, Matsuyama answered with a six-foot eagle putt at the par-five 15th hole to move to nine under.

Not content with that statement, the Japanese then made birdies at Nos. 16 and 17 to reach 11 under.

What inspired Matsuyama during the delay?

“I spent the hour just sitting in my car, looking at my cell phone,” he said.

After making statements of his own on the back nine during the first two rounds, Rose did not have enough answers on Saturday. He was six under on the back nine on Thursday and three under on Friday but finished even par over his final nine holes.

“I’ve been playing with the lead the whole week, and obviously there’s been an hour of golf where Hideki has moved out there in front,” Rose said. “You know, the guys chasing at seven under are all capable of that little run that Hideki has had, so it’s all up for grabs (Sunday).”

The 24-year-old Zalatoris, who played in the final group with Rose on Saturday, showed his poise with two birdies and two bogeys on the front nine followed by two birdies and a bogey on the back.

The American, who is playing in his first Masters, could be the first debutant to win at Augusta since Fuzzy Zoeller in 1979.

“Obviously I’m four shots back, so I’ve got a good chance.”