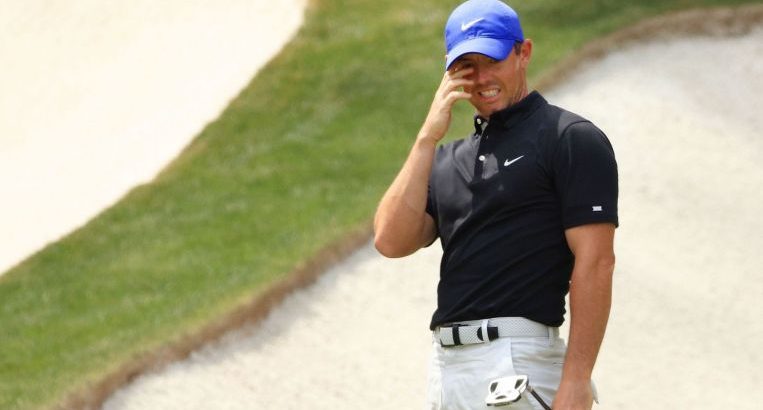 AUGUSTA, UNITED STATES (AFP) – Rory McIlroy struck his father with a wayward shot in Thursday’s (April 8) opening round of the Masters on the way to his worst start at Augusta National, a four-over par 76.

The 31-year-old from Northern Ireland, a four-time major winner, can complete a career Grand Slam with a Masters triumph, but he has been working on his swing and struggling to find consistency.

Summing up his issues was his second shot at the par-4 seventh hole, with McIlroy slightly behind a tree to the left and coming off back-to-back bogeys.

Trying to bend his approach around a tree, McIlroy instead sliced the ball well right, the errant ball striking his father on the back of a leg as he was walking to the green.

“I should ask for an autographed glove,” the elder McIlroy joked.

Rory McIlroy joked that he might sign something that would come in more useful to heal his dad’s sore calf.

“He has seen me sign plenty of stuff over the years, so I think that’s the least of his worries,” the younger McIlroy said.

“I think he just needs to go and put some ice on – maybe I’ll autograph a bag of frozen peas for him.”

McIlroy, whose worst prior Masters start was last year’s 75, had already seen his father down the right side and was aiming at him with plans for the ball to curl back toward the green, which it didn’t do, setting up a third bogey in a row.

“I knew it was my dad when I was aiming at him,” McIlroy said.

“In fairness, I was trying to turn it off. It was a perfect shot. It was dead straight.

“But I think he was OK. He didn’t limp away. He walked away pretty swiftly so that was all right.”

McIlroy’s problems aren’t as easy to walk off. He hasn’t won since 2019 in Shanghai and hasn’t won a major since the 2014 PGA Championship.

“It still didn’t feel quite 100 per cent but I was encouraged by some of the stuff I saw out there,” McIlroy said of a round that featured six bogeys and two birdies.

‘I hung in there’

“Any time you’re working on things with your swing, it’s going to feel very different, but it’s not as if I haven’t done these things before,” McIlroy said.

“That’s the thing. It’s like you get into these bad habits and that feels normal, and then you get it back into position where I’ve been a million times before and it just feels a little different.”

Firm and fast conditions had many of the world’s top players scrambling.

“I hung in there, hit some good shots coming in. I’m quite encouraged by the way I hit it on the way in,” McIlroy said.

“Could have made a couple more birdies, but it’s not as if anyone is going really low.

“The par-5s you can birdie but then you have to be happy with giving yourself 25-, 30-footers every time. If you can do that, you’ve played a really good round of golf.”