Sandwich, Kent: Jason Day has been fine-tuning his British Open preparations and is feeling good as he prepares to play his 10th at the course where he played his second. That was in 2011 when the former world No.1 now freely admits he did not really know what he was doing.

The current world No.68 is intent on making up lost ground and after arriving on Sunday morning and walking the course, only chipping and putting, the 33-year-old played nine holes the next day after the wind had shifted from a southerly to the predominantly northerly direction which is expected for the tournament.

A full 18 on Tuesday in the company of countrymen Jason Scrivener, Aaron Pike and Deyen Lawson was enough to leave him in bullish mood and contemplating winding down with a bit of practice and maybe a few holes on the eve of the tournament proper.

“I’m looking forward to the week, to be honest. It feels good coming off a couple of good stretches of golf, the first at home in America and the second here in the UK, and confidence is starting to move in the right direction, in my game and in myself as well,” Day said. “Last week and this week I’ve prepped really well. This is going to be a long week and I’ve got to stay focused.“

Day tees off away from the marquee slots after breakfast and after lunch, out with Joost Luiten of the Netherlands and Johannes Veerman of the US just after midday (9pm Thursday AEST) on day one and at 7.19am on day two, when they will hope to take advantage of a little less scrutiny from the galleries, the possibility of more benign early-morning winds and the certainty of barely-trafficked fresh greens.

“The course feels a bit softer than the Opens we’ve played in the past and it depends how the R&A want to present it on the weekend,” Day added, though the forecast is for the weather to warm up and the lush course to start drying out. “The rough is healthy and there is a premium on hitting fairways.” 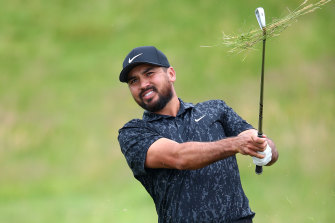 Jason Day during practice for The Open at Royal St George’s this week.Credit:Getty

He hit most of those in his practice round, left a two iron a couple of inches behind the cup at the 238-yard par-three 11th – though he admitted it was his second attempt at it as the first went a “bit left” – and said he enjoyed reacquainting himself with the east Kent course where he finished a respectable tied 30th a decade ago.

“I don’t remember much about it other than the course was brown and the weather was horrific,” he added, referring to the Saturday monsoon which played havoc with the third-round scoring, his own a six-over 76.

“It was a lot of fun though and only my second Open in the UK. At the start I didn’t know how to play true links golf because I hit it high and really didn’t work the ball.

“The last five years or so I’ve started to fall in love with the actual Open and the golf courses we play not so much for the history because you have to have imagination to play them as well, not just the appreciation that golf actually started in this part of the world.”

Marc Leishman, meanwhile, played an afternoon practice round on Tuesday with his good friend and fellow Olympic team member Cameron Smith, Leishman with clubs which finally turned up 36 hours after he arrived and which had been waylaid en route to London from Boston.

In the meantime he had been on to his supplier Callaway and they had knocked up a replica set in case his originals failed to turn up, as has happened to him before.

He had also been out to buy some clothes to get by, a shirt and a grey pair of jeans “which kind of looked like pants” making an appearance on his person at the course on Monday.

“There were so many baggage tags all over the place, Boston, New York, to somewhere else. I wouldn’t say I was panicking but the biggest thing is my driver, I love my driver,” Leishman said.

“That was the thing I was worried about having to replace.”