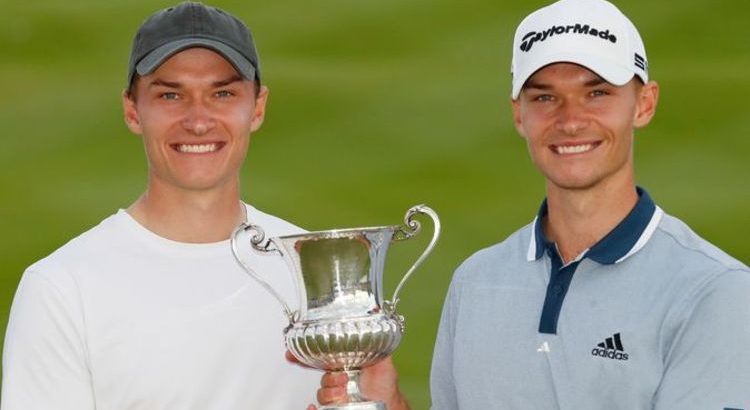 Nicolai Hojgaard claimed his first ever European Tour victory at the Italian Open, just one week after his twin brother Ramus picked up the European Masters.

Hojgaard’s victory wrote himself and his brother into the record books, as his win in Italy means the twins become the first brothers to win back-to-back in European Tour history.

The Dane’s level-par round of 71 proved enough for victory, as he ended the event on 13-under to claim the Italian title by one shot.

Heading down the final hole, it looked as if the tournament was heading for a three-way play-off between the eventual winner, Tommy Fleetwood and Adrian Meronk.

However Hojgaard had other ideas, as the 20-year-old hit a sublime approach shot from the fairway of the par five 18th to leave him a simple putt for birdie, that would be enough for his maiden European Tour title.

The youngster followed up his superb wedge shot by rolling in the putt for a birdie four, to ensure he moved away from Fleetwood and Meronk on 12-under-par, into a solo lead to claim the tournament at Marco Simone Golf Club.

Hojgaard had enjoyed a stellar week at the event, and it was his six-under-par 65 in round three that moved him to the top of the leaderboard heading into Sunday’s final round.

There was no doubt day four proved the toughest for the Dane though, as birdies seemed much harder to come by than the flurry he enjoyed one day prior.

Despite this, he found one just at the right time on 18 to follow up his twin brother’s heroics at the European Masters one week earlier with a title of his own.

Speaking after his victory, an emotional Hojgaard spoke about the importance of picking up his first ever European Tour crown.

He said: “It’s crazy, it’s been such a tough day… I’ve been through every f***** emotion. “This is what I’ve worked for my entire life. I felt a bit uncomfortable out there with my pace today. I kept putting pressure on myself all the time.

“But on 18, we had to make four, and we did it. To do that makes me really happy. I was really nervous standing over the three footer at the last, I could barely hold the putter, but it went in and I’m just so happy.”

Whilst there was joy for Hojgaard, there was despair for Fleetwood, as the Englishman was denied his first win in two years by a single shot following the Dane’s final hole heroics.

Fleetwood himself enjoyed success on the final hole of the week, as like Hojgaard he was also able to find an all-important birdie to tie him at the top alongside the 20-year-old and clubhouse leader, Meronk.

However this enjoyment did not last long, as the Dane soon followed the 30-year-old up the 18th to find a four of his own to ensure the tournament required no play-off decider, extending Fleetwood’s two-year wait for a ninth professional win.

In spite of the disappointment, the Englishman’s improved form comes just at the right time as he is set to make his second-straight Ryder Cup appearance at this year’s event in two weeks’ time.