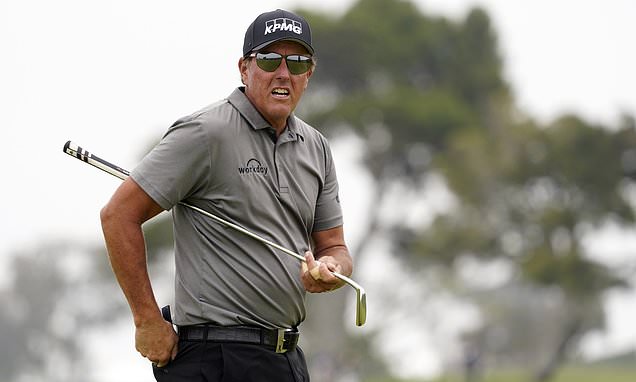 At the beginning of the week the talk had been all about whether he finally could win the US Open and complete the career Grand Slam at the course he played hundreds of times as a boy.

As it turned out, we got Phil Mickelson playing just like the full-grown man so many have come to love. There was plenty to keep the crowd entertained, but far too many mistakes to be a factor at the weekend.

This was his 30th attempt to claim America’s national championship and it ended like a couple of his heartbreakers in the past, with an ugly six down the last hole. What a way to sign off in front of his hometown crowd, as a wildly off-line approach to this par five finished way beyond the green and adjacent to a grandstand filled with people watching the leaders tee off.

The only surprise is he didn’t pitch it off the stand to 12ft and hole the putt. He probably would have if it had mattered. This time he posted a 75 to finish outside the top 50.

Outside the ropes, his wife Amy and parents loved the spectacle, regardless. It must be quite a thing watching your husband/son on home soil in this event.

‘It means a lot because of how many times my dad and I got to play round this course,’ said Phil.

‘When I made it into the school and college teams and we had matches here, he would come out to watch. So it’s not just because it’s Father’s Day and it’s the US Open in San Diego. There’s all the memories that the week has brought back.’ Everything feels less urgent for Mickelson, of course, following the miracle at Kiawah Island last month. How that has changed the dynamic for the man who turned 51 last Wednesday.

‘It’s fair to say that win has still not sunk in fully, and I’m going to enjoy staring at the Wanamaker Trophy this summer,’ he said, smiling.

‘Don’t get me wrong, though. I still hope to add a friend to place alongside it sometime.’

Typical Mickelson, he praised the ultra-fair set-up while still having a dig at Mike Davis, the outgoing CEO of the USGA.

The pair have had quite the run-in over the years. You might remember Mickelson making a statement about Davis’s set-up, not to mention making a prat of himself, when he knocked his ball back and forth in a misguided protest at the greens at Shinnecock Hills in 2018.

‘I can’t tell you how impressed I am with the way the course has been set up this year,’ said Mickelson, fully aware that Davis played no part. ‘This is my 30th Open and easily the best and the fairest layout that I have ever seen.’ For the two men who redefined what can be done in this sport this spring, it was the day when Old Father Time delivered a swinging riposte.

Not just Mickelson but Richard Bland, the oldest halfway leader in US Open history came swiftly to earth as well. There was no escaping the 48-year-old Englishman on American television on Saturday as his remarkable story was brought to a new audience.

There was no finding him 24 hours later as he finished before the leaders came to the closing holes. A third-round 76, featuring no birdies, had seen to that.

As the luck of the draw would have it, by his side for the final round was Guido Migliozzi, the gifted Italian who Bland just happened to beat in a play-off to win his first tournament at the 478th attempt at The Belfry last month. 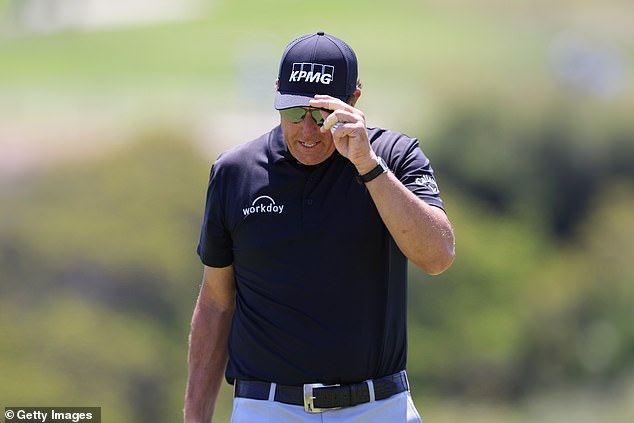 Bland didn’t draw much from the pairing early on. He was birdie-free over the front nine of his final round as well, with two bogeys leading to him falling outside the top 30 at that stage. When it goes in this sport, it goes.

Bland is due in Munich this week to play the BMW International on a far easier course where he won’t be wearing out his woods and long irons.

Let’s hope he can find the rhythm that has earned him so many more admirers. After all, he’s got another Open to try to get a spot in next month. Shane Lowry will be there at Royal St George’s, of course, as he’s still the defending champion, although this was a disappointing week after his third-place finish at the USPGA. He closed with a 79 to be well down. American Kyle Westmoreland didn’t have a good day, either, but he fully deserved the thunderous ovation he received from those around the 18th green.

In the biggest military city in America, and the base for over 120,000 active personnel, it was recognition for the fact he served his country for five years before he became a pro.

The 29-year-old from Indiana is the first Air Force graduate to make the halfway cut in a US Open, and how appropriate he should do so here, where the jets flying constantly overhead must have left him feeling right at home.