Sandwich: Cameron Smith has not been back to Australia for 19 months and though he cannot wait to get back home, he is putting his time to good use. His round of 67 on Friday afternoon in one of the later pairings at the British Open has him well-placed to challenge at four under.

Two bogeys in the first three holes left him in a difficult situation in a marquee three-ball with Rory McIlroy and Patrick Reed, but he got back under par at the eighth hole and save for bogeys at the 15th and the last, enjoyed a thoroughly satisfactory afternoon. 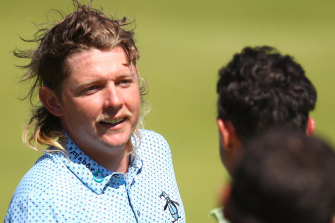 Australia’s Cameron Smith of Australia and Rory McIlroy of Northern Ireland after finishing their second rounds at the British Open.Credit:Getty Images

“It was good to see a few birdies out there today and a bit nicer conditions,” said Smith, who outscored both of his illustrious playing partners.

“It was nice to see the ball do what you wanted it to do, yesterday it was a bit of a guessing game. Head down, arse up, let’s try and get up the leaderboard. If the weather is going to be like this it’s going to be pretty close to double digits.”

Smith, who always wears maroon on the Sunday of tournaments, was also delighted about the State of Origin result and is keen to make this weekend a double cause for celebration at Royal St George’s Golf Club.

“It was nice to start the week on a good note. I actually slept in on Wednesday and watched the boys play and then came out for a late practice round. Yeah, I’m really proud of the boys. They brought some pride back to Queensland. They put a smile on my face.”

Adam Scott secured his weekend place with a four-under 66 to reach one under and will be among the earlier starters, but he is still relishing the challenge.

“There are good scores out there and if I can get out early and get all the favourable conditions and things that can happen at the Open, you just never know what will happen,” he said.

“You know, it’s that kind of course. It can you can look like a champion when you knock it straight down the middle with driver and look like a fool when you’re laying up in the rough with a five-iron.”