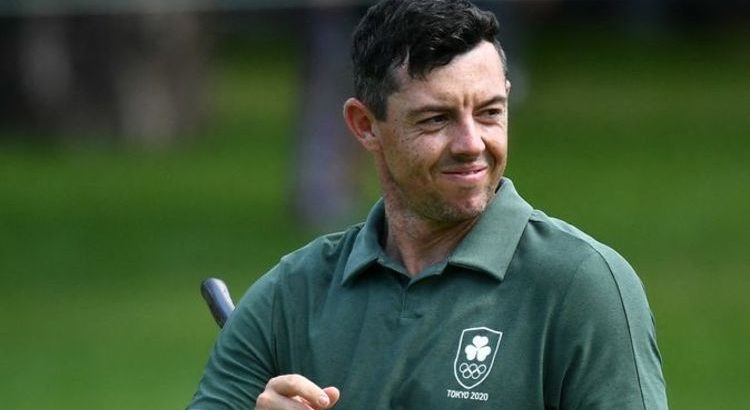 Rory McIlroy said he was ‘happy to be proven wrong’ after he praised his wife Erica for changing his perspective on the Olympic Games. McIlroy is competing at the golf event for Team Ireland at Kasumigaseki Country Club in Tokyo this week despite having initial doubts about becoming an Olympian.

Ahead of his trip to Japan the four-time major winner was apprehensive about the thought of competing in the Games, explaining that the event was ‘not much to look forward to’.

Speaking after this year’s Open Championship at Royal St George’s, McIlroy said: “I don’t know if there is much to look forward to [about the Olympics], It’s obviously going to be a very different environment.”

However, after competing in Tokyo and speaking to his wife the two-time PGA Championship winner has had a real change of perspective when it comes to being an Olympic athlete.

Following his third-round four-under-par, 67 McIlory commented: “I need to give things a chance. I was speaking to my wife last night and saying maybe I shouldn’t be so sceptical. But I think I need to do a better job of just giving things a chance, experiencing things, not writing them off at first glance.”

The Irishman’s four-under-par third round put him in well in the medal hunt ahead of tomorrow’s final round as he currently sits 12-under for the tournament, two shots behind leader Xander Schauffele of Team USA.

With McIlroy now realising he has a very good chance of collecting one of the biggest prizes in sport, the Irish athlete seemed more than excited at the thought of standing on the Olympic podium tomorrow.

The 32-year-old said: “As you get closer to that finishing line you start thinking about it [a medal] a little bit more. Last week, an Olympic medal, well I didn’t really know what that would mean to me, and now that you got a chance to do it it’s like, geez, that would be pretty cool.”

Despite the excitement however, McIlroy seems to be keeping his feet firmly on the ground, knowing there is still plenty of work STILL to do in his final round if he is to come away with a medal for Team Ireland.

The former world number one added: “You don’t want to look at it [leaderboards] too much but I think this week it’s like top three or nothing, right? You’re taking peeks and glances at it and seeing how far off the pace you are. There’s still 18 holes and there is a lot of golf still and a lot can happen. I need to go play a good round of golf tomorrow and see how it all unfolds.”

McIlroy will begin his final effort to clinch Olympic glory in the penultimate group of round four, as he tees up alongside Mexican Carlos Ortiz and Sebastian Munoz of Colombia in the early hours of Sunday morning at 2:58am BST.