A match-by-match review of the opening day of the 16th Solheim Cup at Gleneagles, where a late USA fightback kept Europe’s overall lead down to one point…

Law and Ciganda got off to a great start as a par was enough to win the opening hole when Pressel and Alex needed three to get down from the fringe, and another American bogey at the fourth took Europe two up. 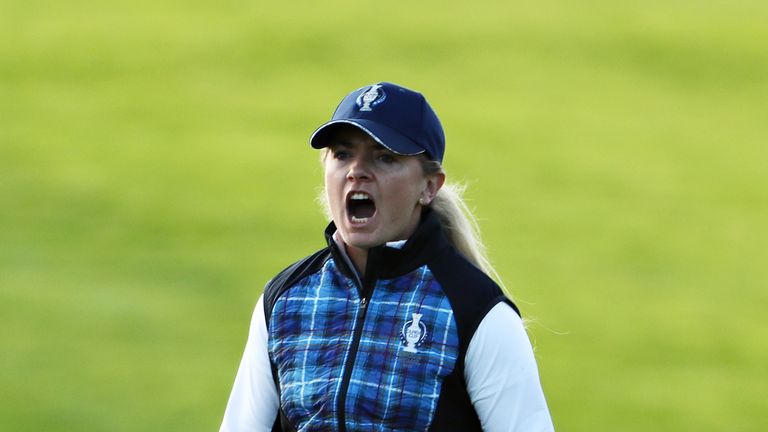 But the match swung when Pressel drained a lengthy birdie putt on the fifth green and some ragged golf from the home pair over the next two holes led to bogeys and they were suddenly one down.

However, they restored parity at the next, although the Americans edged ahead again with a birdie at the 14th before Ciganda rolled in a superb putt for a crucial two at the short 17th which Alex could not match, and a scrappy final hole was halved in pars as the top match ended all square.

Thompson’s proud unbeaten record since 2013 looked set to continue when the visitors gained an early lead over Hall and Boutier at the third, but Thompson and Altomare bogeyed the next before the Europeans moved ahead with a birdie at five. 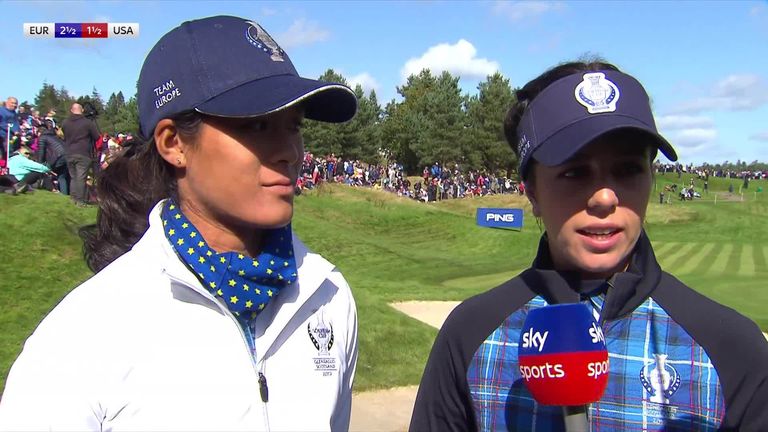 The American pair got into more trouble on the seventh and slipped two down, and they did well to escape with a half in par at the long ninth despite Thompson blocking her second into water, but they were soon three down when Boutier holed a superb 30-footer for birdie from the rear fringe at the 10th.

A bogey five was enough to take Europe four ahead at the 12th and, although the Americans won 14 and 16 to extend the match, Hall and Boutier closed out an impressive victory when Thompson and Altomare were unable to birdie the 17th.

The Korda sisters had to persuade Juli Inkster to pair the siblings together when the captain had reservations, but it proved an inspired move as they romped to a one-sided 6&4 win over Masson and Ewart Shadoff. 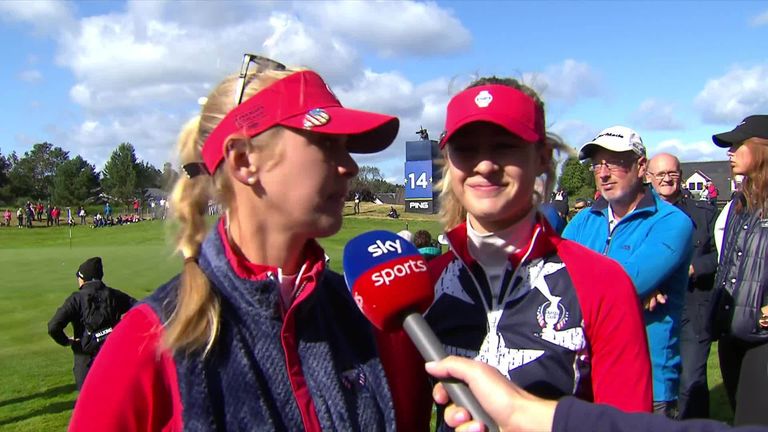 The Kordas made their intentions clear with birdies for wins on the first two holes and, with the European pair struggling for rhythm, pars at the fourth and fifth were good enough to take the Americans four up.

Ewart Shadoff then raced a six-foot birdie putt a similar distance past the hole at the seventh and Masson missed the return, but the home pair stopped the rot with a par at the eighth only to make a mess of the long ninth as the Americans turned with a commanding five-up lead.

Masson holed from 12 feet at the 10th for a brave half after Jessica Korda had chipped in for a two, and the Kordas completed a resounding 6&4 win on the 14th green when Ewart Shadoff’s birdie putt drifted wide of the target.

A par at the first gave Hull and Munoz the early lead which was cancelled out by an American birdie at the second, but Khang and Park struggled for accuracy at the fourth and fifth and gifted the Europeans a two-up lead. But Hull and Munoz then encountered problems of their own and lost the sixth and eighth holes to par, and the long ninth was then halved in bogey-sixes before Hull and Munoz made their first birdie of the match at the 13th to edge beck ahead.

The next three holes were halved in pars, and a solid three at the 17th proved enough to score a 2&1 win for Hull and Munoz as Khang and Park failed to save par following a wayward tee shot.

Pettersen enjoyed a successful return to Solheim Cup action to help justify her wildcard selection, although rookie Anne Van Dam did most of the damage as Europe swept to a 4&2 victory in the top fourballs match. 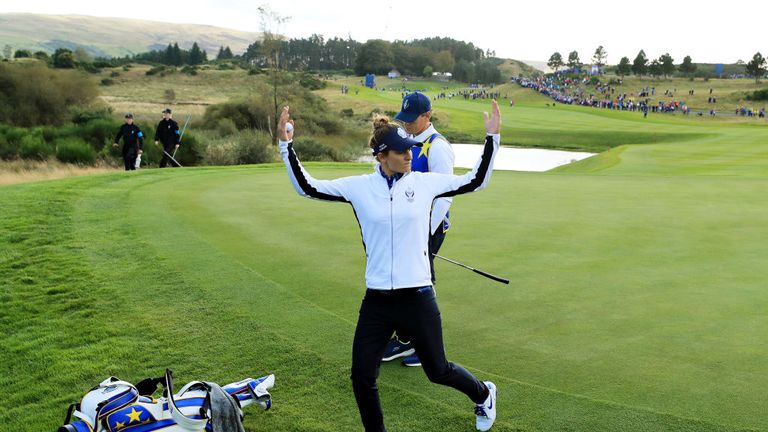 Van Dam’s par won the opening hole after Kang and Salas both found trouble off the tee and, after Salas birdied the second, Pettersen nailed a huge, 40-foot putt for a bonus birdie at the fourth to restore the blue lead.

The Dutch debutant then hit one of the shots of the day at the short sixth to set up another winning birdie, which she followed with further wins at the seventh and ninth to take the home side four up at the turn.

Pettersen more than played her part as she birdied 10 and 11 to earn crucial halves and, although Salas pulled one back when she drove the green at 14 and two-putted for birdie, the European pair had plenty in hand and wrapped up a painstakingly slow encounter on the 16th green – five hours and 11 minutes after they teed off.

Nordqvist and Hedwall have enjoyed huge success in their Solheim Cup careers, but the Swedish stalwarts were horribly out of sorts from the outset as they were comprehensively outclassed by Yin and McDonald, who made four birdies in an impressive debut. 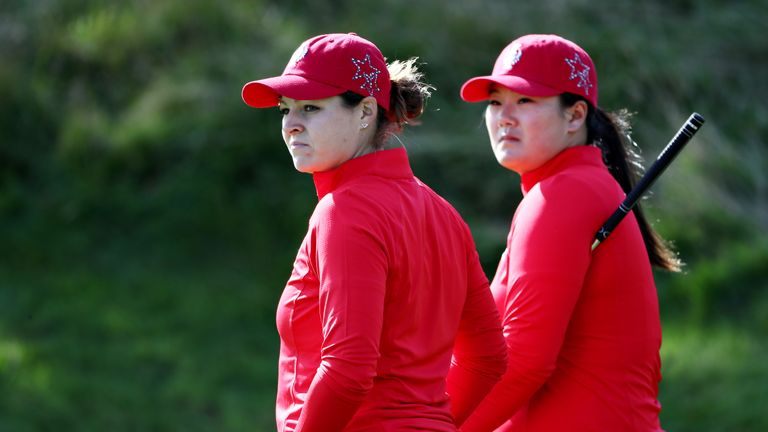 McDonald birdied the second in between a pair of Yin birdies as the American pair won the first three holes, and McDonald rolled in another good putt on the fifth to take them four up.

The lead became seven when Yin and McDonald combined for three straight birdies around the turn, but the Swedes managed to avoid a record defeat when Nordqvist finally managed to register their first birdie of the day at the 12th.

But that was only a minor respite as neither of the European pair were able to scramble a par at the next, handing Team USA a thumping 7&5 victory which levelled the overall scores at the time.

Hull and Munoz looked set to make it two wins out of two on the opening day as they recovered from a slow start to open up a four-hole lead with six to play, but they were undone by a terrific fightback from Korda and Altomare.

Having beaten Megan Khang and Annie Park in the morning foursomes despite making only one birdie, Hull and Munoz were more free-flowing after lunch but had to come from behind when both bogeyed the first hole. 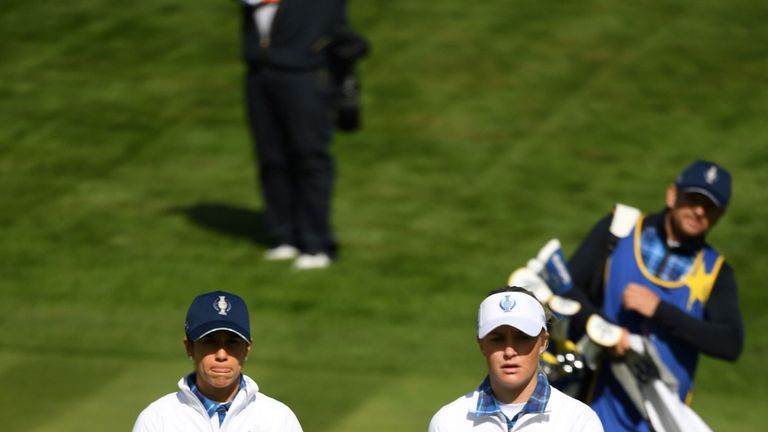 Munoz birdied the fourth and seventh around a winning par from Hull at the sixth, and the English ace holed a superb putt for a two at the 10th to take her team into a commanding three-up lead.

That became four when Hull added another birdie at the 12th before Altomare responded at the next, and the Americans then birdied the last three holes to snatch an unlikely half, with Altomare holing from 20 feet at the last and Hull and Ciganda both missing from similar range.

Having suffered his first defeat since 2013 in the morning foursomes, Thompson needed to birdie the final hole to avoid another loss Jessica Korda as Law and Ciganda came agonisingly close to pulling off a magnificent come-from-behind win in a see-saw encounter.

After a scrappy first hole from the European pair, Ciganda won the next two holes only for Korda to birdie the next and an American par was enough to win the fifth, but Law then birdied the next two holes as the lead changed hands for the third time in seven holes. 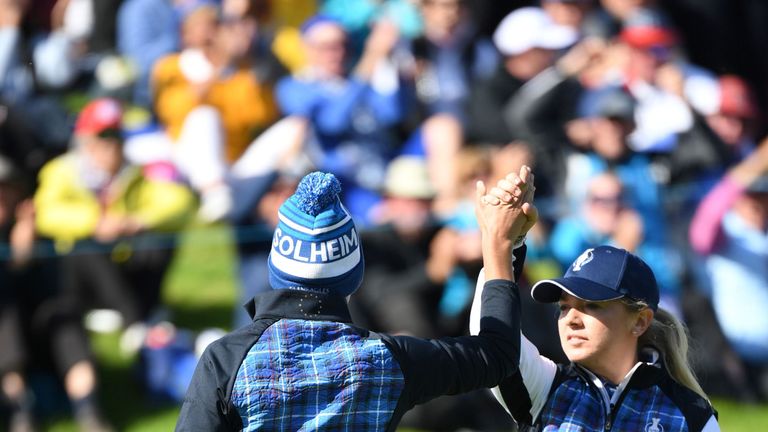 Korda then hit the ninth green in two and holed for the first eagle of the 16th Solheim Cup, which she followed with a birdie at the next to take the visitors back in front, but Law responded once again with a winning birdie at 11.