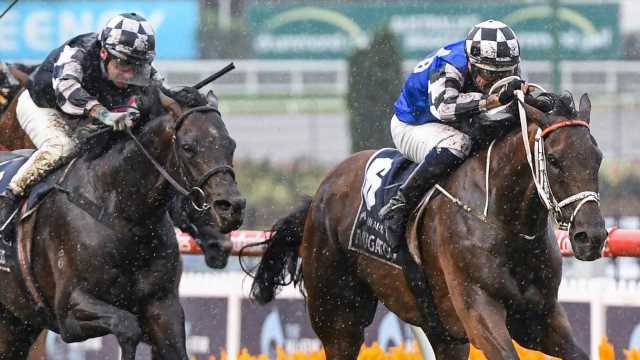 Unfortunately there had to be a loser at the end of a battle of two Australian riding greats in the All-Star Mile.

Damien Oliver was at his brilliant best in the $5 million All-Star Mile but even his genius wasn’t enough to get Russian Camelot over the line.

Hugh Bowman rode an equally outstanding race to get Mugatoo into a striking position on the home turn but looked to have run out of options, with the Kris Lees-trained galloper stuck behind the leaders.

However, Bowman got that small slice of luck big-race winners need when Behemoth and The Harrovian parted just enough for him to get Mugatoo into clear running at the 200m.

Two brilliant horseman coaxed, rather than forced, the best out of a pair of top racehorses in the final 200m.

The pair cleared out from the rest despite Bowman and Oliver using the whip a dozen times between them, none with, in the thrilling finish before Mugatoo prevailed.

The COVID-reduced crowd knew it had witnessed two champion jockeys at their best in testing conditions, roaring their approval during the closing stages in a manner Bowman had heard four times in the past aboard the mighty mare Winx in Cox Plates.

Bowman knew Oliver was watching him from the 500m and tried to keep him in a pocket on the home turn for as long as possible.

“I could sense him waiting for me to run into trouble, but then all of a sudden a gap appeared in front of me,” Bowman said.

“Sometimes the best options are when you don’t have any and Damien really did have control of my fate.

“As things would have it, I got room in front of me and I think the best horse won on the day.”

Oliver was proud of Russian Camelot’s brave second but conceded Mugatoo was stronger on the day.

“Super run. Had a great run through but just found a better wet-tracker on the day,” Oliver said.

However, Sir Dragonet was never a winning chance after over-racing for WA jockey William Pike, who picked up the mount after his original booking Arcadia Queen was scratched on the morning of the race.

The All-Star Mile is about bringing new people into racing. Oliver and Bowman did their bit to achieve that objective.