Battaash underlined his bullet-like reputation as he smashed his own course record to land a fourth King George Stakes easily and give racing a welcome lift.

The mood among the few present at a crowdless Glorious Goodwood understandably took a knock with the news that Saturday’s crowd test event had to be cancelled.

But the raw speed of the Charlie Hills-trained sprinter injected energy into the day and added to this difficult season’s uplifting efforts by the super six-year-olds following Tuesday’s Goodwood Cup win by Stradivarius and last Saturday’s King George VI & Queen Elizabeth Stakes victory by Enable. 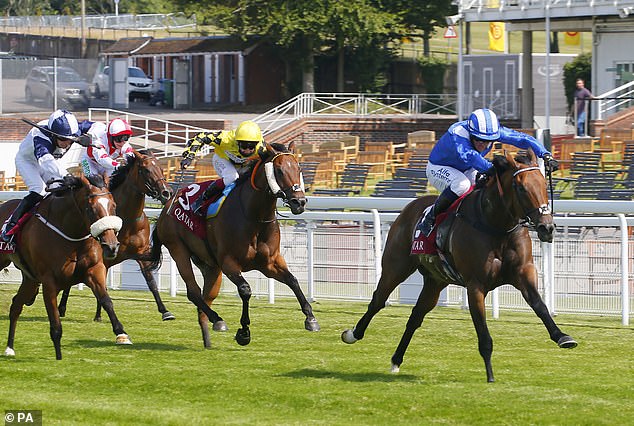 On paper, Battaash had nothing to fear from his six rivals and that is how it unfolded as he gave runner-up Glass Slippers 8lb and a two-and-a-quarter length beating.

Jim Crowley’s only problem was that nothing could match the Battaash dash as he led after two furlongs of the five-furlong race with the jockey claiming the Sheik Hamdan Al Maktoum-owned gelding was idling in the closing stages despite lowering the five-furlong track best by 0.58sec with a race time of 55.62sec.

Hills said: ‘He is a true athlete and has captured the imagination of the public. He has his quirks but you know where you stand with him.

‘As soon as he stops showing all his enthusiasm, that’s the day we will have to call it quits but hopefully that is a long way off.’ Battaash’s programme writes itself. Next up will be his fourth run in the Nunthorpe Stakes at York next month, a race he won last year, and then the Prix de L’Abbaye, which he won in 2017.

A repeat of the testing conditions in the race last year when Battaash was well beaten might make his team reluctant to head to France.

But one of the few alternatives is the Breeders’ Cup and Sheik Hamdan has shown a reluctance to send Baattash there.