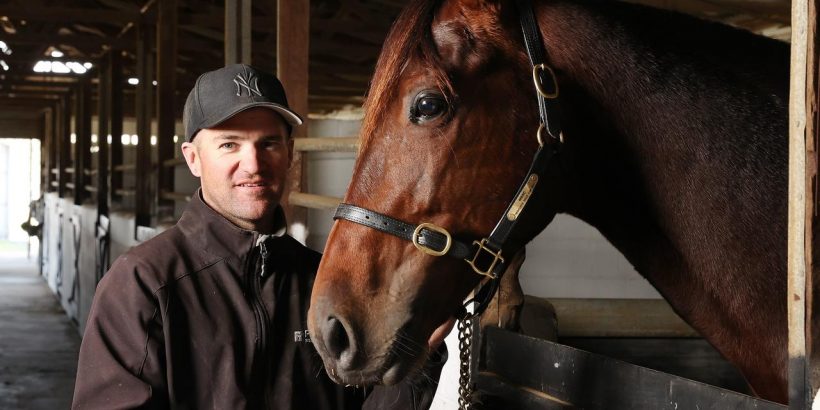 Luke McCarthy is a bit of an interloper in Queensland these days, but that wasn’t always the case.

McCarthy, now part of Australia’s most dominant stable with wife Belinda in NSW, cut his teeth from the age of 15 to 27 in Queensland, working alongside his dad, John, a hugely successful trainer in his own right.

For more than a decade they were the backbone of harness racing in the Sunshine State.

While his brothers, first Andy and then Todd, moved to the USA to become superstar freelance drivers, McCarthy set his family up at Cobbity, just outside Campbelltown, in NSW.

But going back “home” and winning big races is always extra special to McCarthy. He is unashamedly proud the stable has a quarter of the field – four runners – in Queensland’s biggest race, the $250,000 Group 1 Blacks A Fake, at Albion Park on Saturday night.

Leading their charge is Australia’s champion pacer King Of Swing, who is a $1.25 TAB favourite to successfully defend the Blacks A Fake crown he won in the delayed running last December.

Team McCarthy also has Chariots Of Fire winner Expensive Ego, emerging star Spirit Of St Louis and the honest Bright Energy in the big one.

The King has been de-throned! Copy That and Anthony Butt hold on to claim the Group 1 Sunshine Sprint by the barest of possible margins, holding out the champion King Of Swing. Bring on the Blacks A Fake next weekend! #QLDisRacingpic.twitter.com/4l7GpPdDLW

“We always love getting back up here with a team of horses, but all the great changes they’ve made to this (Constellations) Carnival made it so attractive,” McCarthy said.

“We’d normally send a few horses up, but I’ve basically made it home for the past five weeks or so. It’s been fantastic.”

But this is not just a carnival raid for Team McCarthy.

“We’re lucky enough to have a property here in Stockleigh (near Logan Village) which we’ve owned for a while and rented out, but we took it back a few months ago and have set it up to have horses here all the time. Our main stable will still be down in NSW, but we’ll rotate horses around to have a constant team racing out of this place,” he said.

“It’s just perfect having this place. We’ve set it up very similar to what we’ve got in NSW so the horses feel right at home when they come here and don’t skip a beat.

“It was the right time to get this place up and running. Things really seem to be on the up here (in Queensland) and we’ve got such a big team of horses, being able to move them between NSW and here gives us more options to find the right races for the right horses.”

McCarthy is no stranger to winning Queensland’s biggest races, having driven the winner of the now defunct Group 1 Queensland Pacing Championship a staggering seven times in the space of just 10 years, including back-to-back wins on Mr Feelgood (2010/11) and Slipnslide (2005/06).

He’s won the Blacks A Fake (formerly the Winter Cup) twice before, on King Of Swing last year and Ideal Scott in 2013.

For all the superstars he has, McCarthy rates King Of Swing the best yet.

“He’s something else. We’ve loved him from the day he arrived across from Perth and his record is incredible,” he said.

Even though King Of Swing has won two Miracle Miles, a Hunter Cup and a Blacks A Fake, McCarthy thinks he is still on the up.

“He’s never gone better. Look how big he went last week. I think to get as close as he did to Copy That (beaten a nose in the Sunshine Sprint) was incredible. I think it’s as good as any run he’s had for us,” he said.

“It also silenced a few I think, those who said he was just a leader because he’d been in front for so many of his big wins.”

It will be the others chasing King Of Swing again this week though with barrier one making him an almost certain leader and, in the eyes of most, a certain winner.

“He’s thrived here and the draw has gone his way. They’ll need to do something special to beat him this week,” McCarthy said.

“Expensive Ego is also right where we want him, but he’ll need some luck from the back row. Spirit Of St Louis is also on the rise. He went terrific in an easier race last week and he’ll run a race from his draw, too.”