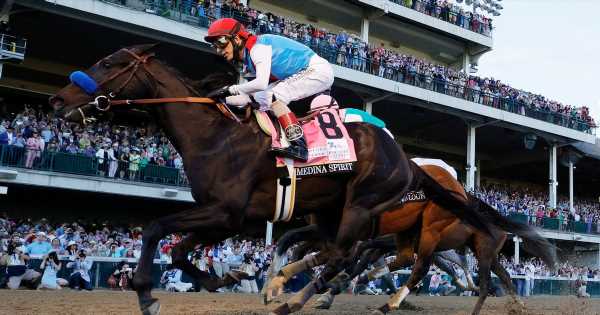 The champion colt, who took the Churchill Downs race on May 1, had anti-inflammatory steroid betamethasone in his system.

The news shocked the racing world on Sunday night – and now Medina Spirit faces disqualification with the results of a second test expected. Baffert strongly denies any wrongdoing.

If confirmed, the trainer, who described the original findings as "the biggest gut-punch I've had," will lose the substantial winnings and runner-up Mandaloun would be promoted to first place.

Fans who placed bets on the first past the post would still be able to keep their money however – and Mandaloun's backers would receive nothing.

Baffert, whose success with the £723 purchase was a record seventh in the Derby, said: "I don't know what's going on in racing right now, but something's not right.

"I don’t feel embarrassed, I feel like I was wronged.

"This horse was never treated with that. He’s a great horse, he doesn’t deserve this."

The trainer, 68, has been suspended from making entries at Churchill Downs.

A statement said: "Failure to comply with the rules and medication protocols jeopardises the safety of the horses and jockeys, the integrity of our sport and the reputation of the Kentucky Derby and all who participate. Churchill Downs will not tolerate it.

"Given the seriousness of the alleged offence, Churchill Downs will immediately suspend Bob Baffert, the trainer of Medina Spirit, from entering any horses at Churchill Downs Racetrack.

"To be clear, if the findings are upheld, Medina Spirit’s results in the Kentucky Derby will be invalidated and Mandaloun will be declared the winner.

"We will await the conclusion of the Kentucky Horse Racing Commission's investigation before taking further steps."

In 2015, Baffert trained American Pharoah to become the first horse since 1978 to win the coveted Triple Crown in his country.

He repeated the achievement in 2018 with Justify.