The $22,000 first prizemoney in the Exceed And Excel @ Darley Handicap (1100m) won't make a dent in the colt’s $2 million purchase price but, as far as his career goes, he needs to add it to the bank account. 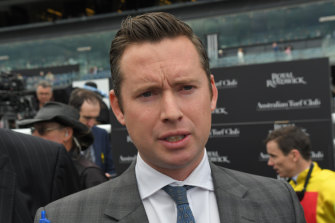 Bott said Faretti, whose only start to date was a sixth of seven on a soft 7 in the group 2 Silver Slipper in February, should be making his mark in much better company as the season continues.

“I’d like to think he’s shown he is a stakes class colt,’’ he said.

“We thought a fair bit of him to make his debut in stakes company, but he’s shown plenty of promise at home and his trials back that up. The next step is he has to take it to race day.

“We want to get the foundation, some racing into him and get him seasoned and confident, because the autumn is when he’s going to stand up and be counted.’’

A race like the Listed Brian Crowley Stakes (1200m) at Randwick on October 26 is shaping as a likely target if Faretti impresses first-up.

It means the three-year-old is only going to be a bit player in the spring, but Bott says this mid-week maiden will shape the immediate future.

“Whether there is much left in the carnival, he’s probably going to be a bit rushed to get to some of the other races. There’s still the Magic Millions in the back of your mind,’’ he said.

“This will tell us everything about the path forward and, hopefully, we will have some decisions to make about that path.’’

Faretti may have only had one race start but he’s had six barrier trials in total and won all of them.

He was scratched from the Warwick Farm meeting three weeks ago due to a heavy track and has been kept up to the mark in winning his third trial this preparation on September 27.

“He’s had the one start in stakes company but he struggled in the going on that day, so we didn’t want to resume on a similar track,’’ Bott said.

“He showed speed in his trials but I’d like to think he can utilise the good draw and hold a forward position if he shows that speed. If there’s a natural leader in there, it would help.’’