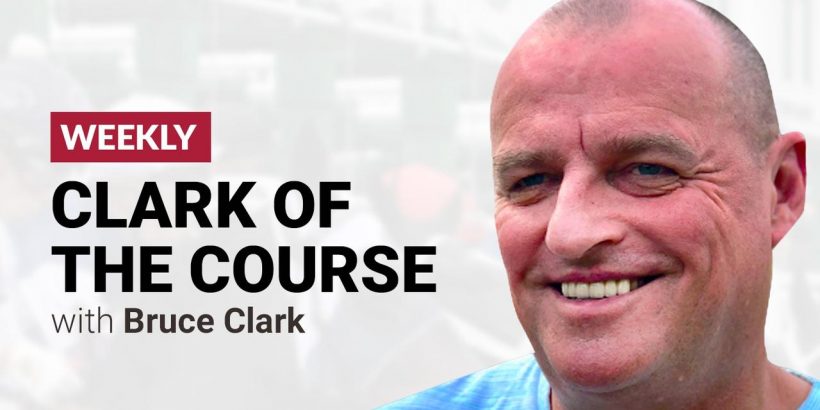 This week I want to tell you about the female jockey having a breakout year. She’s ridden more winners this season than any before in her career. Loads more.

She’s striking at 18.8 per cent if that tickles your fancy. It’s a big improvement on the 1.6 per cent last year.

Which translates to having ridden nine winners this season, on top of just one in the previous. Before that it was three, five, five, one and seven.

So I’m obviously not talking Jamie Kah here, but it’s Shirley Hunter, the 54-year-old Benalla based jockey who landed a winner last week with Lord Domino at Wangaratta, for long-time partner Peter Burgun.

Is she the oldest professional female jockey? Deb Waymouth rides the picnics in her mid 60s – but I reckon Shirley has got the rest covered.

Why is this important when we had Group 1 racing in Brisbane and Jamie marching towards her 100 for the season at Flemington. Or I could be banging on again about the whip, or that Racing Australia may have woken from its slumber with the return of ‘messiah Messara’.

No, because people like Shirley Hunter make this game tick. While Lord Domino might have been a $3 chance, Hunter’s winning price range has extended up to 200-1, many of her rides are in triple figures and many are just making up the numbers.

But without the likes of Hunter, who traces back to the real trailblazers like Linda Jones in New Zealand, the road would have been a little more bumpy for the shining stars of Michelle Payne and the Jamie Kah’s of our sport.

Not that Hunter is carrying any torch, she’s just carrying on.

Something she has been doing since she was having her first ride as a 16-year-old in a race Te Aroha – the picturesque New Zealand racetrack – as they say – famously known as the “place of love”.

“I had a day licence if that makes any sense, rode against picnic jockeys, back then there was no barriers, it was a strand start,” Hunter told me this week.

Shirley Hunter has a big opinion of this horse. 😃 pic.twitter.com/y7TgKyZT3c

And some five decades later she’s still doing it – no manager, doesn’t chase rides (“I’m too shy”) – just one of the numerous unsung, almost unnoticed that make this industry so thoroughly real, and full of stories, if you seek them out, to be shared and told.

When Jamie Kah was riding the first two winners at Flemington on Saturday en route to a record-breaking Melbourne premiership and over a century of winners in a season, (Shirley has ridden 251 this millennium), she was strapping one at Bendigo.

Burgun had a Fiorente four-year-old on debut and Shirley tells the story. “He’s almost 18 hands, I’m 47.5kg. I thought he would be a handful for our normal strapper Barry Mills, he trains greyhounds, so I said I’d look after him. Threw me around like a rag doll,” she said.

Of course I had noticed Hunter riding her rare city winners like Grand Sai Wan (she was 48 then and it was her first in town) and Lady Day and started doing some more research before chatting.

I got a little more excited when I found S Hunter with four rides for four wins, for none other than Aidan O’Brien, Ireland, plus another raft of winners across Ireland.

“No that wasn’t me sadly (it was a Stephen Hunter actually),” she said.

“I did ride in Sweden though, rode Arabian horses and I rode out of Newmarket for Mark Tompkins.”

One thing the data does tell you is how many tracks Hunter has plied her craft on since being ‘exported’ from New Zealand in 1983 because her boss Alan Jones had too many apprentices and no place for her.

There has been plenty of time on the sidelines through injury but never enough to deter Hunter from returning to her job with the same passion she had growing up in New Zealand.

Corowa and Albury have been happy hunting grounds. She has her best strike rate at Tocumwal (20%), throw in Narrandera, Leeton then a Lucky Grills mix that includes Deniliquin, Hay, Moulamein, Carrathool, Towong, Hillbrook, Jerilderie, Kilcoy, Hillston and Kerang.

But it’s none out of 10 at Flemington, none out of 11 at Sandown and none from six at Caulfield, mind you, she hasn’t troubled the record books at Mortlake or Chiltern on visits and at nil at Nhill.

“When I came to Australia I spent some time in Queensland, met a guy and went to England but one winter there was enough – it was too cold,” she said.

There have been stints in Singapore and Malaysia – “I remember riding for a trainer and we were coming back from Kuala Lumpur and found out he had lost $800,000 on two horses then he lost 10 horses from the stable,” she said.

There have been stints with Gerald Ryan and Mick Kent before Richard Freyer offered a job in Corowa which is how she met Burgun, riding a horse called Laurie‘s Legacy and they have been together ever since. (As a side fact, one of their loyal stable clients is a Dr Don Watson, one time Paul Keating speechwriter and famous author – he’s in Lady Day.)

There have been broken ankles, broken collarbones, bunged up knees, horses flipping on her, long times on the sidelines but never the resolve tested despite doctors warning of the issues.

Thinking she’d retire at 40, Hunter has no intent of even considering that and keeps her body (and some of the horses) massaged with a special gel that helps all aches and pains and she was only too happy to share details of how it works on the Redox molecules – or the communication centres in the cells – that signal when something is wrong or needs to be changed.

“When I first started, it was very male orientated, you know women were meant to be home doing the washing and in the kitchen but it’s come a long way since then and I still enjoy it and competing so why would I give it away.”

“I’ve seen the likes of Maree Lyndon since Linda (Jones) came along all those years ago and then Catherine Treymayne has been a friend of mine and a big help. We are far more accepted now – as we should be.”

“But even now at the supermarket or the shops if you pick up what looks a heavy box and a guy might want to come over and ask if you need help.”

Shirley has no upcoming rides booked – “I ride for people I like and who like me,” she said.

Shirley is very likeable, and good for her she is still riding and racing is all the better for people like her.

Now you may recall the horse I blackbooked for you a few weeks back – Oribsyn.

Not being a smartie, he strolled in last Wednesday again at Doomben in a Class 3 at the juicy odds of $1.12.

And no he still can’t be bought for Hong Kong, but into $34 in betting for The Everest? Please!

He’s a good horse and he will get the patient care (as he already has) from David Vandyke, but without being Captain Obvious – there is a long way to go to be considered an Everest contender, especially by slot holders, mostly with stud interests, partnering with a gelding, albeit a promising one.

Anyone keen to dive in for The Everest? https://t.co/Kmgu2OYA6V

Mind you Lost And Running, also a gelding, is now an $11 chance for The Everest. And he’s got his own Twitter handle now, they must be serious.

And Eduardo with runs on the board remains $15 and should be next taken alongside Portland Sky, who I note is into $26 after a recent mention (not that I’m taking credit).

Thanks to the detailed work of Malcolm McLaren at Form Focus confirming what must be truly unique with Hugh Bowman and the Cummings clan in Group 1 races.

And of course another Derby for Anthony Cummings with Fiveandahalfstar.

Is there is any research on a jockey riding Group 1 winners across the Hayes or Freedman clan as impressive than that? Well that’s another job for you Malcolm.

And obviously there was much to admire the way in which Ed Cummings not only handled his horse but also himself into and post The Oaks.

And just for trivia, because I love a horse name, Duais is Irish (the pronunciation rhymes with Lewis) meaning – a prize (honour or reward striven for in a competitive contest; that which may be won by chance).

Bendigo prides itself as “the nursery of champions”, where Group 1 stars like Hyperno, Better Loosen Up, Shocking and Santa Ana Lana – have taken their maiden.

Now this might be an early crow, but I’d be following Hosier off the back of what I saw Saturday, and it’s underlined by some stunning form lines that suggest the $3 SP was a touch of overs after more was bet.

He then went to Fairyhouse to run second to a horse called Pontchateau who is now a star in the making in Hong Kong as Charity Fun (with three wins and recent Group second as favourite).

Good to see Rob Hickmott back at Macedon working with Lloyd Williams and the team and you’d think they have plenty to work with here.

Mind you I don’t think I’d come the $51 for the Melbourne Cup just yet. But it is going to be a different year.

It’s been well shared and fantastic viewing with Oisin Murphy called the Epsom Derby and the horse he gave up riding to Adam Kirby winning, but it’s worth watching.

The backstory is tremendous.

Kirby was jocked off John Keeper for Frankie Dettori, meaning he had lost Adayar to Murphy, but Charlie Appleby wanted Kirby and why not, Kirby had broken in the horse (as well as the eventual third) and was an important part of the Godolphin team, albeit down the food chain.

Murphy took the news of his release in typical “my time will come” style and then produced this video that has gone viral.

“It’s mad, it’s crazy,” said Kirby in the Racing Post. ”What goes around comes around.”

“It can all be said now,” he declared. ”I was asked to ride John Leeper, which was an exciting moment. Five minutes later Charlie rang and asked me to ride this lad. I told him I was sorry but I had just committed myself to John Leeper. I’m a man of my word and I had put my name to him.

“Losing the ride on John Leeper has worked out great! You wouldn’t have wanted to be around me for the first hour after it happened but I got over it and, luckily, I spoke with Charlie relatively quickly. He had his jockey booked (Murphy), and that was the champion jockey, but he was kind enough to let me ride the horse. Full credit to him. He’s a great trainer, a great man, a great father and I can’t thank him enough.”

🏇 He was originally booked to ride Adayar in the Cazoo Derby…

🎙 …but instead @oismurphy talked us through the race – as it happened!

You won't want to miss this.

Originally published asThe female jockey having a breakout year at 54