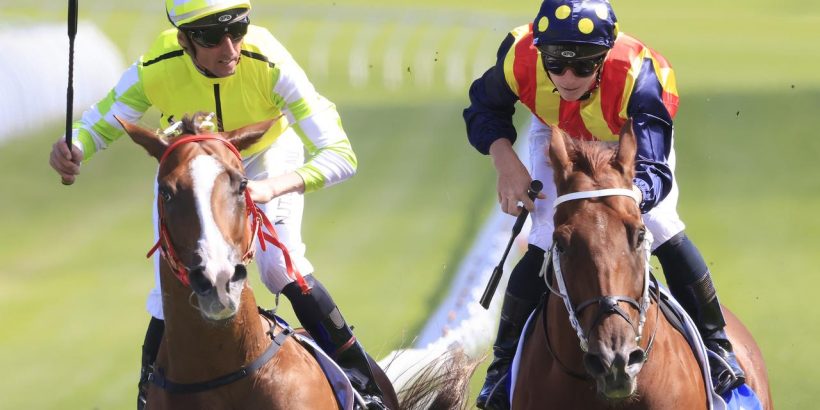 Trainer Joe Pride is hopeful of securing a start for stable star Eduardo in the $15 million The TAB Everest within days.

Pride, who is saddling up El Cohete in the China Horse Club Handicap (1100m) and Titanium Power who contests the Ranvet Handicap (1550m) at Canterbury on Wednesday, revealed an Everest slot-holder is close to making a call on Eduardo.

“There has been interest in Eduardo but the slot-holder wants to wait until after the Stradbroke (Handicap, Eagle Farm) on Saturday,” Pride said.

Eduardo and Nature Strip are the only specialist sprinters to win twice at Group 1 level this season.

Nature Strip, winner of the Lightning Stakes and TJ Smith Stakes, has already been selected for The Everest later this year. The Chris Waller-trained gelding is early TAB Fixed Odds favourite at $4.50 for the world’s richest turf race.

But Eduardo, who boasts wins in The Galaxy and Doomben 10,000 at Group 1 level and a memorable defeat of Nature Strip in course record time in the Group 2 Challenge Stakes, still hasn’t been locked in for The Everest.

“Eduardo has the right form so I’ve told my guys (owners) not to panic,” Pride said.

“If they want us for The Everest, that’s great and we should probably know something by the weekend. If they don’t, then I’m sure another slot-holder will pick him up.”

Pride was also similarly optimistic about the winning chances of El Cohete and Titanium Power at the Canterbury midweeks.

El Cohete, unplaced when resuming at Randwick late last month, is unbeaten second-up and is rated at generous odds of $11 with Fastconi rated the $2.90 favourite.

Titanium Power continues to hold his form through an extended race campaign and is on the third line of betting at $4.80 behind Acrophobic ($2.80).

“I probably had El Cohete in the wrong race first-up, they went too fast for him and he got a long way back,” Pride said.

“But with Nash (Rawiller) on, I think he will settle a bit closer at Canterbury and run a very good race.

“Titanium Power is going great; he’s trained on well and is going to be hard to beat again.”

“She is going great, she is a brilliant fresh mare,” the trainer said.

Pride also has entries for Brutality, De Grawin, Snippy Fox and Invinciano for the Randwick meeting.

With rain forecast this week, there is every likelihood of a soft-heavy track surface for Saturday which doesn’t concern Pride as he described all his Randwick entries as “good wet-trackers”.

Mura Mura has been competitive against some of the best juveniles in training this season but she is still trying to break her maiden at Canterbury on Wednesday.

Trainers Peter and Paul Snowden have decided to start Mura Mura’s winter campaign at the midweeks to get that elusive win in the Blue Point At Darley Handicap (1100m).

From five career starts, Mura Mura has been placed in three races including her third placings in the Kirkham Plate behind subsequent Group 2 BRC Sires Produce Stakes winner Tiger Of Malay and in the Golden Gift won by unbeaten Sneaky Five.

Mura Mura has also finished second to the smart Ranch Hand and fourth behind classy Four Moves Ahead, who trained on to win the Group 2 Sweet Embrace Stakes and was the first filly home in the Golden Slipper when fourth to Stay Inside.

The Team Snowden-trained filly hasn’t raced since finishing unplaced in Shaquero’s Magic Millions back in January but two impressive Randwick barrier trial efforts in recent weeks has her primed for her Canterbury comeback.

“Mura Mura has raced well on soft going before so if we get a wet track, it won’t worry this filly,” Peter Snowden said.

“She is by Not A Single Doubt and they enjoy rain-affected tracks, her two trials have been good so she is ready to go.

Trainers Peter and Paul are looking for talented filly Mura Mura to get her winter campaign underway with a win at Canterbury on Wednesday. Photo: AAP ImageSource:AAP

“We had her in two races (on Wednesday) and you would think straight away you would go for the open maiden (Vinery Stud Plate) where she got the weight relief.

“But the horse from the Hawkes stable (Ibaraki) is trialling well and does look hard to beat.

“There has been a few scratchings from the two-year-old maiden so we decided to go there with Mura Mura.”

Invincible Lad goes to Canterbury after finishing second behind the handy Nikholi Beagle at Warwick Farm last week while Stoical was impressive winning first-up at Hawkesbury.

“Invincible Lad is a bit quirky; he can be up and down. You need to ride him off the speed and get him to the outside,” Snowden said.

“Last start he was going really well on the corner then the gap opened and he darted through but then another horse came alongside and he started looking at him.

“When that horse got past him, Invincible Lad started to chase hard again. He has a few tricks about him but he racing well and looks great.

“Stoical’s first-up win was very good. He has had the run back so that will help his fitness and I’m confident he will handle it if we get to a heavy track.”

From the Golden Slipper to the championships, Sky News takes a look back at the wonder of the Autumn Racing Carnival….

From the Golden Slipper to the championships, Sky News takes a look back at the wonder of the Autumn Racing Carnival.

Originally published asCanterbury preview: Pride on the line with Eduardo