Trainers Tash Burleigh and Mitchell Beer have thought about nothing but the Sera Country Championships for some time when it comes to their respective charges, Al Mah Haha and Logan River, and the duo kick off their campaigns together at Canterbury on Wednesday.

For Burleigh, there’s a sense of unfinished business. Al Mah Haha won the Sera qualifier on his home track at Goulburn last year but didn’t contest the final at Randwick after being scratched at the barriers.

In Beer’s case, Logan River was put on ice after his fourth career win and passed a 1350m test when he won the Griffith Cup in September. 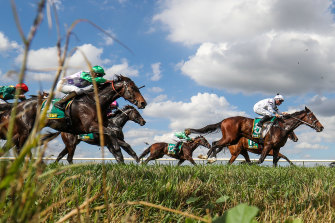 Wednesday’s meeting at Canterbury will double as a springboard towards the Sera Country Championships qualifiers for Al Mah Haha and Logan River.Credit:Morgan Hancock

Both are considered each-way chances by their trainers in the Schweppes Handicap (1100m) at Canterbury but Burleigh and Beer are looking for pointers towards their district qualifiers next month.

“We elected to give him a good rest and he's come back bigger and stronger, a big happy horse and we're really looking forward to seeing how he goes this prep,’’ she said.

“He ran so well in the heat at Goulburn and you couldn't not go back and have another shot. What happened in the final was really unfortunate. Hopefully this year we can tick that box and go on to bigger and better things.’’

Nowra hosts the Sera qualifier for the first time in 2020 on February 16, so Burleigh will assess after Wednesday’s race whether Al Mah Haha has another run or heads straight to the 1400m.

Albury trainer Mitchell Beer has an extra week up his sleeve with Logan River so he’ll definitely attack the Southern Districts heat on February 22 third-up on his home track.

Logan River has won four races for the Beer stable since he was picked up as a tried horse and spearheads the popular trainer’s championships bid.

“He's a lot more settled this time in, we worked on him late last prep to test him over 1350m and he was pretty strong on the line,’’ he said. “I think he has come back as a 1400m horse but he tends to run really well fresh. He's a good each-way chance first-up but his big target is third-up at Albury.’’