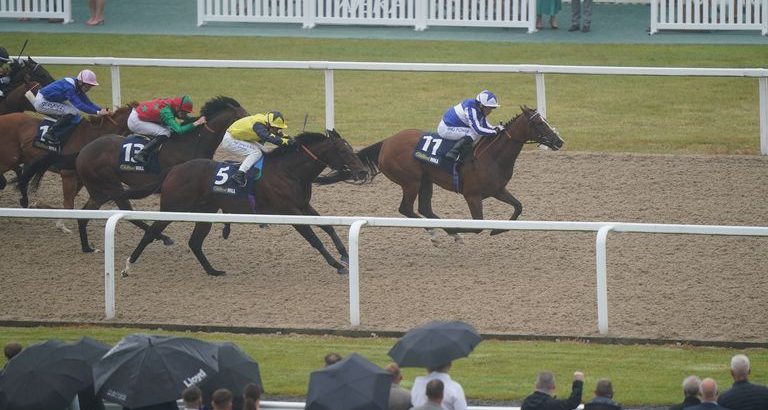 Chil Chil came with a rattling late run to take the Group Three honours in the William Hill Chipchase Stakes at Newcastle.

Andrew Balding’s five-year-old mare had plenty to do with a furlong left, but she produced a telling turn of foot when given the office by Silvestre de Sousa.

Storming past long-time leader Good Effort, Chil Chil (15-2) galloped on strongly to land the spoils by three-quarters of a length with Diligent Harry a further half-length away in third place.

Good Effort made the running from his stands’ rail draw while the well-fancied Diligent Harry was up with the pace in the centre of the track.

The 5-2 favourite Khuzaam appeared to have very chance but never threatened when dropped down to six furlongs for the first time.

Good Effort kept up the gallop but had no answer to Chil Chil, who was cut to 20-1 from 40-1 for the July Cup with Betfair and Paddy Power and 7-1 from 14-1 for the Stewards’ Cup with both firms.

Balding said: “I’m delighted, she’s a mare who has improved a lot since last year.

“We couldn’t run her in the Wokingham at Royal Ascot last week because of the soft ground and it’s worked out well.”

On future plans, he added: “I think we’ve probably blown our cover for the Stewards’ Cup now given the weights haven’t been published yet.

“If the ground came up fast, I think we’ll probably have a crack at the July Cup.”

“She was very lean early on last year but she’s different now, she’s grown up a lot mentally and physically. Andrew has done a great job, shown a lot of patience with her, and it’s paid off today.”