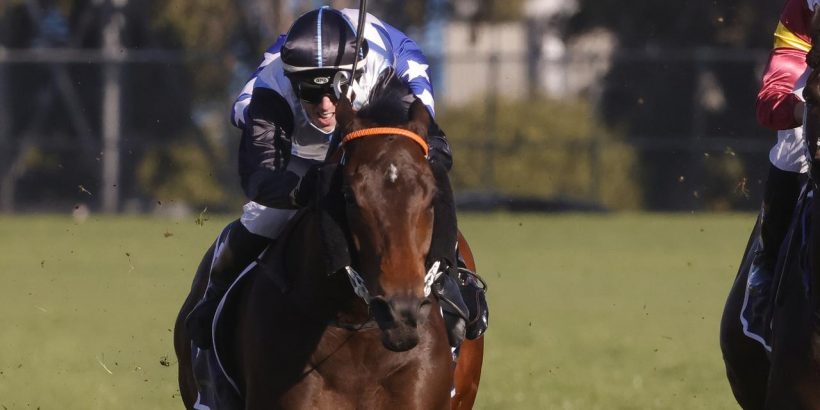 Bandersnatch and Brenton Avdulla made it look simple, controlling the tempo then sprinting away to another stakes success at Rosehill Gardens on Saturday.

If only it was that easy.

Avdulla later admitted the Team Hawkes-trained Bandersnatch’s win in the Listed $150,000 Civic Stakes (1400m) wasn’t as routine as it seemed.

“He is not exactly a push-­button horse to ride,’’ Avdulla said.

“But he is one of those horses that you have to go with, not work against.

“When he gets a race like that where he can take his time and settle on speed, that’s when he is well suited.

“He appreciates these drying tracks, too.’’

Bandersnatch from @HawkesRacing was too good for them and gets back in the winners circle. Peach of a ride from @brentonavdulla to get his treble for the day. pic.twitter.com/4ejFyKuDqv

Bandersnatch ($4.20 favourite) led throughout and was never seriously challenged, scoring by three-quarters of a length from the ever-reliable Tricky Gal ($7) with True Detective ($7.50) a length away third.

Avdulla won both feature Rosehill races after earlier scoring on Sweet Thomas in the Stayers Cup.

He took riding honours on the day with a treble as he also scored on Zing.

With 38 wins for the season, Avdulla has been riding in brilliant form this winter and has surged into the Sydney jockeys’ top-10 premiership rankings.

“Brenton gets on with Bandersnatch and he got the horse into his rhythm today,’’ Hawkes said.

“Bandersnatch jumped well and Brenton took his time to get across. When the horse got to the front, he gave him a breather and then raced away.

“They did a great job and that’s their fourth win together.’’

Bandersnatch had a month between runs and was third-up in the Civic Stakes but Hawkes always felt the sprinter would not be beaten on the score of fitness.

“He hasn’t had a run for four weeks but we weren’t worried about that, we spaced them out that way,’’ Hawkes said.

“It was all about trying to place this horse in the right races and get some prizemoney for the owners.’’

Bandersnatch won his second stakes race — he took out the Listed Carrington Stakes earlier this year — and improved his overall record to seven wins from 19 starts for nearly $500,000 prizemoney.

Hawkes said Bandersnatch wasn’t finished yet and would be aimed at the Listed $150,000 Winter Stakes (1400m) at Royal Randwick on July 10.

Matthew Smith, trainer of Tricky Gal, is seeking a rematch with Bandersnatch after his mare’s fast-finishing second.

Tricky Gal has had a series of frustrating near misses in feature races this season, with six second placings in the Hot Danish Stakes and Guy Walter Stakes at Group 2 level, and a trio of Group 3 races — the Summoned Stakes, Triscay Stakes and Birthday Card Stakes, and now the Listed Civic Stakes.

“We will definitely look at the Winter Stakes in a couple of weeks. She deserves to win a black-type race and she likes these wet tracks.’’

Stable star Masked Crusader is one of the nation’s sprint finds this season and has already been selected for a start in the $15m The TAB Everest (1200m) at Royal Randwick on October 16.

Hawkes said the brilliant Masked Crusader was back in pre-training but won’t return to their Rosehill stables for another two weeks.

Masked Crusader’s spring program is yet to be determined but he is likely to have one or two lead-up runs into The Everest.

Team Hawkes won’t have Ole Kirk and another classy three-year-old, North Pacific, next season as both have been retired to stud. But the stable still has confidence in their emerging equine talent.

“We have some lovely young horses coming through,’’ Hawkes said.

“Hilal and Remarque are back in and both colts have done well during their spells.’’

At The Track with Ray Thomas

TOP TRIO RUN OUT OF TOWN

Sydney jockeys Hugh Bowman, James McDonald and Tommy Berry were pounding the pavement on Brisbane streets on Friday afternoon when they learned they would be banned from riding at the Tattersall’s Tiara meeting at Eagle Farm on Saturday.

The three along with fellow riders Kerrin McEvoy, Josh Parr and Rachel King, and trainer Annabel Neasham, had complied with the initial Queensland government advice to cross the border before 11pm on Wednesday. They had all been tested in Brisbane and returned negative results.

But as Sydney’s worsening Covid-19 cluster forced parts of the eastern suburbs into a lockdown on Friday, the Queensland government ruled the Sydney jockeys could not ride at Eagle Farm.

“We were out having a run when J-Mac’s manager rang and put us on notice that we might have to get out of Brisbane that night,’’ Berry said.

“It was pretty frustrating as we had followed all the rules so we could ride at Eagle Farm. We kept going on our run but we didn’t really have our hearts in it.’’

The jockeys and Neasham were then told they needed to make their way out of Brisbane before the 1am deadline on Saturday or they would need to spend 14 days in hotel quarantine.

Racing NSW chief steward Marc Van Gestel confirmed there was no issue with any of the jockeys riding in NSW this week with Berry, Parr and King to be at Gosford on Tuesday.

Gai Waterhouse conceded she was taken aback by her likeness in the portrait of her painted by Anh Do.

“Anh is amazing,’’ said Waterhouse who was the interview subject on the ABC program Anh’s Brush with Fame last week.

“As he is painting, he was asking about my life and family and my career. He’s very talented. I was there for a few hours, at one point I asked how long they were going to keep me there, but then Anh produces this wonderful portrait of me.’’

Waterhouse will be gifted the portrait next week.

It was difficult to understand criticism of the TAB for giving punters the option of keeping or cancelling early bets placed on the Civic Stakes meeting after the decision was made to move it from Randwick to Rosehill Gardens due to Sydney’s worsening Covid cluster.

The TAB gave punters the choice, unlike some wagering operators which immediately cancelled bets once the venue switch was announced.

Also, Racing NSW and ATC deserve credit for being proactive and moving the meeting to Rosehill at very short notice on Friday ensuring the raceday could proceed as scheduled.

Jockeys Jake Pracey-Holmes and Aaron Sweeney will slug it out in an exhibition fight to raise money for charity next month.

Pracey-Holmes and Sweeney will step into the ring at the Amaroo Hotel in Dubbo on July 23 to help raise funds for their friend, trackwork jockey Beau Agland, who suffered serious long-term injuries in a track fall this year.

RCG IN FOR BIG DAY

Regan Campbell-Gillard, the in-form Parramatta Eels prop, will be cheering for his two sporting passions on Sunday.

Campbell-Gillard, who has represented NSW and Australia, is a part-owner of Charmed Princess, one of the leading contenders for the John Carlton Cup at Grafton.

Although the front-rower missed selection for NSW, he will be hoping that the Blues clinch the State of Origin series when they take on Queensland at Suncorp Stadium.