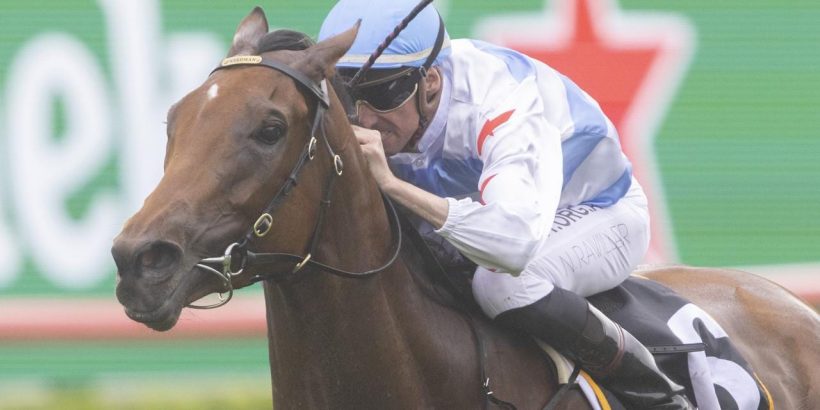 Forbidden Love could become a $4 million filly if she wins the Group 1 $600,000 Coolmore Classic (1500m) at Rosehill Gardens on Saturday.

“This is the obvious race for her,’’ co-trainer Richard Freedman said.

“We could have run her in the Phar Lap Stakes but winning a Group 2 race is not going to add significantly to her value.

“But if she can win another Group 1 like the Coolmore, she goes from being a $2 million filly to being worth up to $4 million.’’

Forbidden Love was a brilliant three-lengths winner of the Group 1 Surround Stakes last start and is the $4.60 favourite to maintain her big-race winning momentum in the Coolmore Classic.

But Freedman, who trains in partnership with his brother Michael, is the first to admit Forbidden Love is faced by some formidable hurdles.

She is backing up off a peak performance, has 54.5kg which is 0.5kg over weight-for-age, takes on older mares and must overcome the hoodoo on fillies and favourites.

The last filly to win the Coolmore was Typhoon Tracy in 2009 and it is has been a decade since a favourite won the race, Aloha (2011).

Forbidden Love’s 54.5kg impost has not been shouldered successfully by a filly in this race since Assertive Lass won under 55.5kg in 1997.

“We have set her a solid task, it will be hard to achieve,’’ Freedman said. “But Michael has her over at Randwick and he tells me she has pulled up better after the Surround than she has pulled up after many of her races – and he knows her better than anyone.

“It seems the run the other day hasn’t taken anything out of her so let’s roll the dice. She was only at her top for maybe about 300m so it wasn’t like she had a very hard run, either.’’

Forbidden Love drew barrier three in the Surround Stakes and comes out of the same gate in the Coolmore Classic.

“I think drawing another good gate helps her,’’ Freedman said. “When she is racing inside horses, she runs the risk of not getting the breaks when you need them.

“She did get the luck the other day and the breaks came but that could easily have not been the case. If she gets the run when she needs it (today) I’m sure she will put herself in the finish.’’

The Freedman brothers are also hopeful Tiger Of Malay can join stablemates Stay Inside and Glistening in next week’s Golden Slipper by winning the Group 3 $175,000 Pago Pago Stakes (1200m).

“Tiger Of Malay’s had no luck with the barrier, the 14 gate will make life difficult for him,’’ Freedman said. “But if he is going to be a really good horse he will still run well.

“He has to win to get into the Slipper but if he doesn’t then is in on the path to the Sires which is a race that will suit him.’’

Originally published asClassic win could be worth millions for Love