Moonee Valley will be encouraged to put forward an ambitious plan to host thousands of people at next year's All-Star Mile if COVID-19 restrictions continue to ease over summer and into the autumn.

Victorian Minister for Racing Martin Pakula says crowds are expected to return to racetracks within weeks, firstly limited at 500 before a gradual move up to 5000 and hopefully back to some resemblance of normality by the time Melbourne's autumn carnival of racing kicks off. 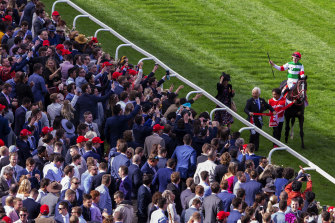 Spectators packed into Moonee Valley for last year’s Cox Plate. Martin Pakula has urged the club to put forward a plan for crowds at the All-Star Mile.Credit:Getty Images

Owners, limited to 30 per race and also limited in the time they're allowed to stay on course, have been back on track in country Victoria for a few weeks now, but Pakula said the gates would open to the general public and owners in metropolitan Melbourne once Racing Victoria, Country Racing Victoria and the three city clubs submitted their COVID-safe proposals.

"The fact that we've had some owners back on track and we're going to get crowds back on track in the next couple of weeks I think is just another step along the road that the economy is taking but it's another great advance for racing,” Pakula told RSN Radio on Monday morning.

"Under the public events framework, from now until early-mid December would be up to 500, but we've indicated that will move every couple of weeks provided we maintain the current infection profile, so that's really promising.

"I think we'll see up to 5000 in a few weeks' time. But it might not take two weeks. It might be that a week from now, the first country meeting of next week, there might be crowds.

"But the way it will look will depend on the plan that's put forward by Country Racing Victoria or by the metropolitan clubs or the venue and that being signed off.

"By the time we get to the autumn, I think the All-Star Mile is at The Valley [next] year, I would hope The Valley submit a reasonably ambitious proposal for a few thousand people at MVRC and a very robust COVID-safety plan and [hopefully] that would be ticked off.”

Pakula believed that CRV could represent all country clubs, who will be preparing for their once-a-year cups and picnic meetings over the summer. But whether crowds will be allowed at the Woolamai picnics on Saturday or Sunday's Jericho Cup meeting at Warrnambool is yet to be determined.

"My suggestion is we talk to the three metro clubs and then CRV on behalf of all of the country clubs about submitting applications,” he said.

"It's not going to be necessary to make applications for every single day of racing; that would be completely [unnecessary].

"Whether we're to get away by Saturday, that's going to be tight, but certainly within the next week or two I expect to see crowds get back to racetracks once those plans are submitted and ticked off by the relevant [authorities].”

Asked why racing was behind hospitality in terms of allowing the general public back in attendance, Pakula said the sport was being treated as an event.

"Racing was allowed to continue for months while a lot of other parts of the economy were closed down, and they were able to continue because there was an exception that the people that were going to the track were people who were plying their trade, they were going to work,” he said.

"Owners have been back now in regional Victoria for a few weeks. Public events are different to hospitality. Racing is being treated no different to other public events, whether it's a caravan and camping show, a cricket match, a Grand Prix, a tennis tournament.

"Racing's not alone inasmuch as there's got to be a process for a return of crowds. It will simply be as much time as it takes for the individual racing club or the PRA [principal racing authority] to submit an application and a COVID-safe plan and have that resolved, and I don't expect that to take very long."