The Victoria Racing Club says it has not yet approved a proposal to move the Australian Cup to late March to make room for the All-Star Mile.

That’s despite Racing Victoria declaring the All-Star Mile will definitely be run before the 2000-metre Flemington group 1 from next year. 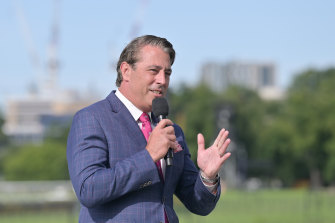 But Racing Victoria has invested heavily in making the All-Star Mile its flagship autumn race, and Carpenter said it won’t be moving the date.

“The All-Star Mile timing is perfect … a week after the long weekend here is absolutely the right timing,” he said at Monday’s launch.

“What we can do, however, is change the order of races, and for that to happen the Australian Cup would go after the All-Star Mile.

“So certainly in 2023, and even a better fit of dates in 2024 when there are three Saturdays post the long weekend in Victoria, you will see the All-Star Mile run in the same place but before the Australian Cup, which will go to the end of March.”

But VRC chief executive Steve Rosich said his club, which is hosting this year’s All-Star Mile for the second time, was yet to approve a date change for the Australian Cup.

“We’ve had lots of collaborative discussions with Racing Victoria. Those discussions continue,” Rosich said, adding it was unlikely an agreement on 2023 would be reached before March. 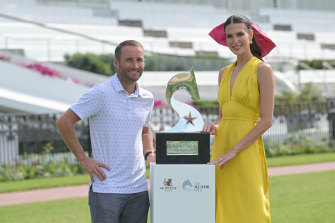 “There is one model that we’ve started to explore which does see the Australian Cup after the All-Star Mile as early as next year … those conversations are early.

“Super Saturday is the biggest race day in most measures outside of the Melbourne Cup Carnival, so we’ll look to protect that. But if there is a way we can enhance Super Saturday and take care of the program and look at it a different way, we’re all ears.”

The All-Star Mile remains a floating fixture across the three metropolitan race clubs, but all three clubs have campaigned to take permanent ownership of the race, including the VRC.

However, champion jockey Damien Oliver, who arrived at the launch via a wayward hot air balloon, which landed 400 metres down the Flemington straight instead of on the lawn, said one of the best features about the All-Star Mile was the rotating venue. 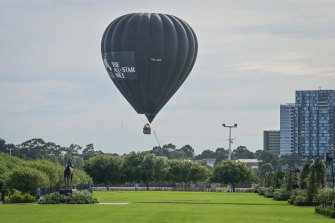 The hot air balloon, which brought Erin Holland and Damien Oliver to the All-Star Mile launch at Flemington, ended up on the racetrack.Credit:Racing Photos

“It’s unique in the fact the public can vote for the field in the race … and the fact that the nomination fee is put towards the Good Friday Appeal is fantastic too,” Oliver said.

“It’s a great concept. I do like the fact it brings new people into racing … [and] the fact it moves around the different tracks is great as well.”

Oliver said he wouldn’t rush to lock in a ride for the race, after last year partnering with the now-retired Russian Camelot, who ran second to Mugatoo, but would try to convince Godolphin to bring Caulfield Guineas winner Anamoe from Sydney down to Melbourne.

Anamoe isn’t nominated for the All-Star Mile and therefore can’t be one of 10 horses voted into the field, but remains a chance to receive one of five wildcards if Godolphin were to accept an invitation. Voting opened on Monday.

Oliver didn’t rule out trying to get to NSW to ride Anamoe later in the autumn carnival if Godolphin was open to him riding the valuable colt in Sydney.