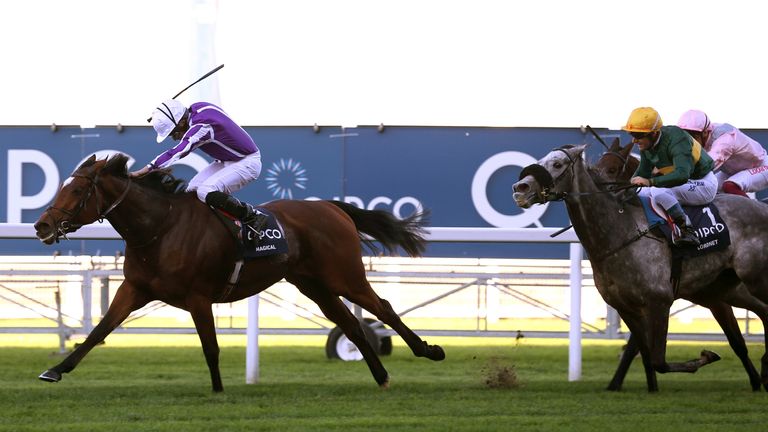 Magical, Headman and the supplemented Elarqam are among 11 horses confirmed for the Qipco Irish Champion Stakes at Leopardstown.

Aidan O’Brien has saddled a record seven previous winners of Saturday’s 10-furlong showpiece, and Magical appears his chief contender for this year’s renewal after the Ballydoyle handler withdrew Japan, who now looks set to head straight to the Prix de l’Arc de Triomphe.

Magical kicked off her campaign with three successive wins – completing her hat-trick in the Tattersalls Gold Cup at the Curragh in May.

The daughter of Galileo has filled the runner-up spot on each of her three subsequent starts – chasing home Crystal Ocean in the Prince of Wales’s Stakes at Royal Ascot before finding old foe Enable too strong in the Coral-Eclipse at Sandown and the Yorkshire Oaks.

The trainer’s son, Donnacha O’Brien, has not ridden Magical competitively in more than two years, but could be on board this weekend should Ryan Moore stay in Britain to ride in the William Hill St Leger at Doncaster.

O’Brien junior said: “She’s a very tough, consistent mare and she gives her best running every time. Her form is right up there with the best in the world, bar Enable, so she looks to be going there with a big shout.

“Obviously I’m not sure what is going to show up yet, but she looks to be the one that they are all going to have to beat.

“She’s an exceptional mare – she’s probably up there with the best that I’ve ridden. She’s just very unlucky to be in the same two years that Enable was. You’re not going to get fillies like that every year.

“She’s a fantastic mare and she’s been a great servant for us.”

There is set to be a strong British challenge, with Roger Charlton’s Headman joined by the Mark Johnston-trained Elarqam after the latter was added to the field at Tuesday’s supplementary stage.

Headman has earned his step up to the highest level by winning successive Group Two prizes in France, while Elarqam produced a career-best performance to finish a close-up third in the Juddmonte International at York last month.

Elarqam is one of two likely runners for Sheikh Hamdan Al Maktoum, along with Kevin Prendergast’s stable star Madhmoon.

The potential field is completed by Japanese raider Deirdre – winner of the Nassau Stakes at Goodwood on her latest outing.

The other Group One on the opening day of Longines Irish Champions Weekend is the Coolmore Fastnet Rock Matron Stakes.

O’Brien is responsible for six of the 10 fillies still in contention, with dual 1000 Guineas heroine Hermosa seemingly the trainer’s first string – ahead of Goddess, I Can Fly, Happen, Just Wonderful and Coral Beach.

Donnacha O’Brien said of Hermosa: “She’s in great shape. She’s had a little bit of a break, the last few weeks, and her work seems to be really, really good since – probably as good as I’ve felt her all year, so she looks to be going there with a big chance.”

The one to beat is Karl Burke’s defending champion and six-time Group One winner Laurens, who inflicted a shock defeat on Alpha Centauri in last year’s renewal.

Joseph O’Brien’s pair of Red Tea and Iridessa and the John Oxx-trained Skitter Scatter are the other hopefuls.

The Clipper Logistics Boomerang Stakes is a strong Group Two, with Lancaster House – who maintained his unbeaten record at Listowel on Monday – among 19 horses going forward.