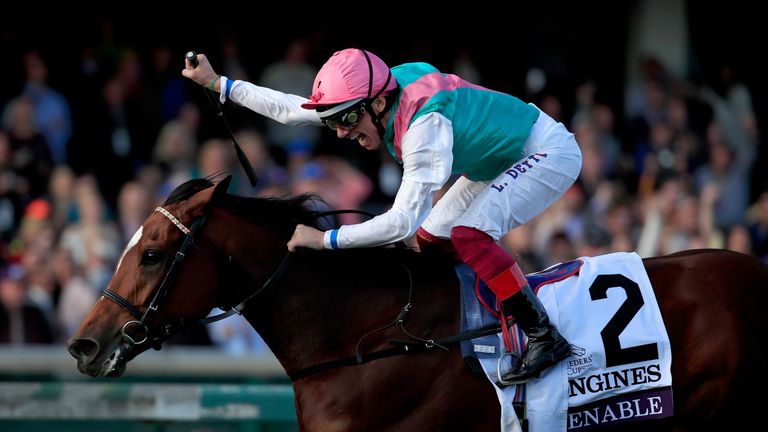 Enable showed her undoubted brilliance when continuing her winning run with an epic success in the Breeders’ Cup Turf at Churchill Downs.

Given a superb ride by Frankie Dettori, the dual Prix de l’Arc de Triomphe heroine was challenged hard by Ryan Moore on Aidan O’Brien’s Magical all the way down the straight, but got on top in the final half-furlong.

Dettori managed to get Enable off the rail and to a better part of the track and the move paid off, as the John Gosden-trained filly justified her short price in style.

The first two pulled well clear of the rest of the field, with the Khalid Abdullah-owned Enable becoming the first Arc winner to follow up at the Breeders’ Cup in the same season.

Gosden said: “It was a big ask for our filly, and she greatly deserved it. It was a tough race, and Frankie wanted to stay wide.

“When Magical slipped up her inner, I thought, ‘This is the one we’ve got to beat’, but she is mentally so strong and I think it was her mental strength as much as anything that brought her home in front.

“She’s had a difficult year and really it’s amazing she’s here today. She showed enormous courage, beating a very high-class filly, and it was interesting that they came well clear of the third.

“It was a wonderful stretch run between two great fillies and two great jockeys. We’ve come out on top and full marks to the filly because she’s been very brave and mentally very strong to get herself here.

“Maybe she’s getting better. She did it today with sheer guts and determination. It’s wonderful for her owner-breeder Prince Khalid Abdullah. He was keen to come here and has been rewarded.”

Dettori, recording a double after winning the Mile in the same colours aboard Expert Eye, said: “She’s conquered America! She’s the first one to do it. Amazing, I’ve no words to say how brilliant she is.

“We had two inches of rain this last 48 hours and her wheels were spinning round the bend, so I took her on a wide trip to get her on fresh ground and then she was comfortable.

“I went for the better ground and she found another gear. he soft ground. She’s very special.

“Ryan beat me on Golden Horn and now the record’s even.”

Abdullah’s racing manager Teddy Grimthorpe was asked about the daughter of Nathaniel staying in training as a five-year-old.

He said: “I was yelling for Frankie, it was just a fantastic race. So much has gone into the whole year and it became an emotional roller-coaster ride for Prince Khalid.

“He will take his time before deciding on her future, but whatever decision he makes will be the right one.”

On the subject of another season, Gosden quipped: “Mr Dettori has three children going to college, so he’ll be very keen she stays in training!”