Encouraged by son Tom Charlton, who is working for John O'Shea in Sydney, to nominate for the weight-for-age race, Aspetar became the first international horse to submit an entry for the $5 million contest before Tuesday's deadline. 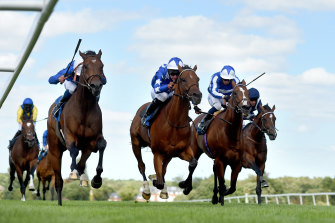 The five-year-old middle distance horse is lightly raced with five wins from 13 starts, but it was following last Saturday's group 2 York Stakes win over 2100 metres that Tom called his father and suggested he nominate for the Moonee Valley classic.

"I've always actually tried to put the Sydney autumn carnival on his radar and the owners, Qatar-based, have always had the rich Qatar race in February, understandably, on their radar so that blew that out of the question," Tom told The Age.

"So after he won on Saturday, I just thought, in a year where it looks like the Japanese can't come, it's probably looking like it might be a slightly weaker year than it has been – at this stage – and on that performance he would be competitive. He's a horse that would suit the style of racing at Moonee Valley; that's just the way he runs.

It was only four starts back, in September last year, that Aspetar claimed the 2400-metre group 1 Preis von Europa at Cologne in Germany, beating 2018 Caulfield Cup winner Best Solution in a scintillating time.

He then travelled to Sha Tin but nothing went right in the rich Hong Kong Vase in December. Yet two runs this campaign have been more than promising.

Charlton said he expected his dad would stay at home, in the UK, but send two stablehands with the horse, who is next expected to line-up in the Juddmonte International Stakes on August 19 where a clash with Godolphin star Barney Roy is anticipated. The winner of the International Stakes is eligible for a $1 million bonus, on top of the Cox Plate's $3 million winning purse.

Also, Charlton said stayer Withhold, who is owned by connections in Melbourne, was due to run on Saturday night at Newmarket and could be on a trip to Melbourne for the Cup if he was to run well.

Withhold travelled to Melbourne in 2018 but bled from both nostrils when eighth in the Geelong Cup.

Meanwhile, at Moonee Valley on Saturday trainer Jason Warren got "the monkey off our back" with three-year-old filly Brooklyn Hustle winning a benchmark-78 sprint by three-and-a-half lengths.

Warren said he had high hopes for the rising sprinter, who finished fifth to Exceedance in the Coolmore Stud Stakes at her most recent start.

Correction: An earlier edition of this story stated the winner of the Intenational Stakes would be entitled to a $2 million Cox Plate bonus. That was incorrect. The bonus is worth $1 million.