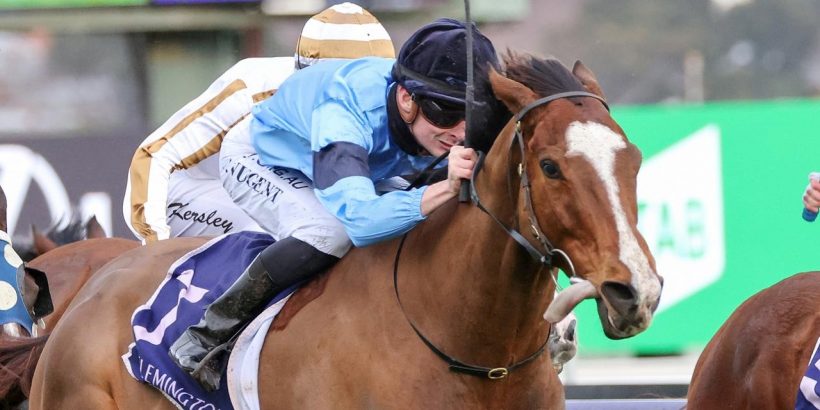 Apprentice Teo Nugent’s ride on Bartholomeu Dias was as cold as his surrounds at Flemington on Saturday.

Melbourne’s lockdown led to empty concrete and glass structures overseeing the Flemington track on Saturday while the weather had deteriorated before the Sir Eugene Gorman Handicap (1600m).

Nugent was just as cold, letting his rivals dice for positions until the 400m before he wound up the resuming Bartholomeu Dias ($21), who produced a powerful finish to notch an upset win.

Bartholomeu Dias was happy to race with his tongue flapping out the side of his mouth as he overran Hi Stranger and the $3.70 favourite Dice Roll.

Nugent said Bartholomeu Dias’s trainers Ciaron Maher and David Eustace had been at him to be patient in his rides.

That approach paid off with his latest Flemington success.

“Dave drummed it into me to be patient, and that’s something we’re certainly working on,” Nugent said.

“I trialled him a week-and-a-half ago at Traralgon over 950m and he gave me a lovely feel and coming here today we were quietly confident.”

Eustace said the stable expected Bartholomeu Dias to run well without winning but the import has thrived being trained away from the racetrack at their Fingal operation.

“He is doing largely hill track training away from any racetrack and that seems to have gotten him in the right frame of mind,” Eustace said.

That and he got a beautiful ride from Teo (Nugent) who was patient.

“We drilled that into him to be patient on him. He listened and he rode him really well.”

Dice Roll started as the $3.70 favourite after the scratching of Degraves.

Dice Roll raced wide throughout but was far from disgraced, boxing on well to finish 1¼ lengths from the winner.

THUNDER STUNS THEM FOR KAH

Co-trainer Michael Kent Jr said Saturday’s race was “D-Day” for I’m Thunderstruck with conditions in his favour in the $135,000 race.

The New Zealand purchase relished the big Flemington track, letting down impressively to end the race as a contest with 200m to run.

Kent Jr and jockey Jamie Kah agreed the son of Melbourne Cup winner Shocking had plenty to learn but his talent was undeniable.

“You can see he’s always wanted to lay in,” Kent Jr said.

“We bought him off a trial in New Zealand and he was the same there and he can do it (lay in) but I suppose he was quickening up so quickly he was entitled to do a bit wrong.

“It’s going to be good when he gets things right.”

FURRION ended an 807-day drought with a gutsy win at Flemington on Saturday, taking out the ATA Celebrates Women Trainers Handicap (2000m) at Flemington.

Jockey Declan Bates gave the 2019 Warrnambool Cup every possible chance, settling behind the speed with cover before emerging in the three-wide running line on the bend.

Runner-up DR DRILL was held up in the straight – as Madison Lloyd worked between horses – but Furrion responded to the challenge.

“I think Gerry (Ryan) might have to give him a new caravan for that one because the ride won the race,” Smith said.

Bates, who said Furrion responded to Dr Drill sidling up the last 100m, was thrilled to get the result on the same day as his daughter‘s second birthday.

“I want to give a shout-out to my daughter, it’s her birthday today,” Bates said.

“Her and her mother Jen are stuck at home under lockdown for her birthday.”

Furrion could return to the races at The Valley on July 31.

It wouldn’t be a Flemington meeting of late without a long-odds winner – in a straight race especially – so fitting on the final day at Headquarters this season a $41 outsider got the job done.

Nathan Hobson-trained YULONG STORM, whose last win was at Flemington last September, came from near last with Craig Newitt in the saddle to blouse WILMOT PASS on the winning post.

Newitt has ridden a winner at Flemington at his past three visits, including $101 shot Free To Move in the Listed AR Creswick Stakes (1200m) on June 19.

Hobson paid $9500 for the former Peter and Paul Snowden-trained sprinter, who has four of 16 starts now for the Swan Hill conditioner.

“I was going to run him in the Mildura Cup next week.

“I’ll have to see if there’s another meeting at Flemington and come back.

“If there’s a race there, we’ll probably come back then.

The late money for KALKARNI ROYALE was spot as the Nicconi mare, backed from $9 to $7 before the jump, nailing SPACEBOY at the finish.

In driving rain, leading apprentice jockey Will Price trailed the eventual runner-up in transit before unleashing late on the Kevin Corstens-trained four-year-old mare.

“I didn‘t have to do too much then,” Price said.

“Just travelled beautifully on the back (Spaceboy) Benny Melham gave me a good cart and I was happy to peel off his back late and knife him.”

The 21-year-old moved to 47 metropolitan winners for the season – outright fourth.

Favourite DIRTY THOUGHTS went stride for stride with Spaceboy but was no match and made do with third.

Flemington was officially downgraded to a Soft 6 after the race.

The track was downgraded to a Soft 6 before the race, which was run in the rain.

The Good Fight ($15) thrived in the conditions as the ex-Kiwi stayer outslugged Sydney visitor Sweet Thomas ($6) in the last 200m.

Favourite South Pacific turned in a poor run, weakening quickly in the straight to finish nine lengths from the winner.

“He was disappointing. He got forced out of his comfort zone early when the pressure came on,” jockey Jamie Kah said of the $2.15 favourite.