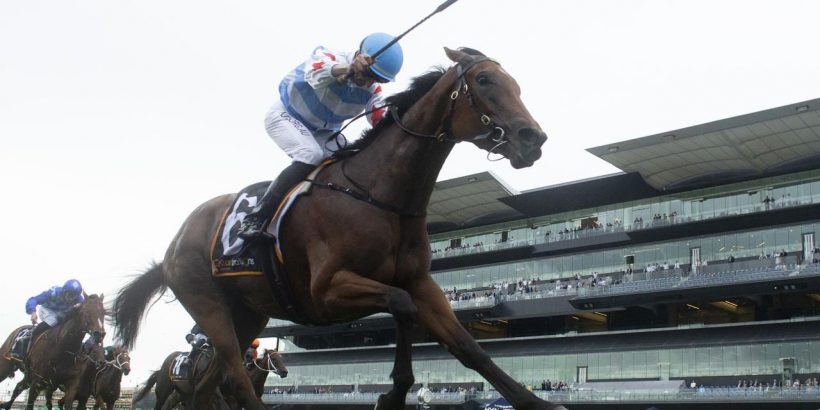 Trainers Michael and Richard Freedman are becoming increasingly concerned their brilliant filly Forbidden Love might miss a start in the Group 1 $3 million The Star Doncaster Mile (1600m) at Royal Randwick on Saturday.

Forbidden Love is right on the borderline of squeezing into the Doncaster with the final field and barrier draw announced on Tuesday morning.

A brilliant winner of the Group 1 Surround Stakes earlier in the autumn, Forbidden Love is prominent in early betting for the big race at $17 and with only 49kg she is a definite lightweight chance – provided she can sneak into the final field.

“I’m getting mixed reports about whether she is going to get a run or not,’’ Michael Freedman said.

“I don’t understand the criteria that a Group 1-winning filly could miss a start over some of the others who may get into the race.

“But we just have to wait – we will accept (Tuesday morning) and hope she gets into the Doncaster. If she misses a run then Plan B would be the Coolmore Legacy (April 17).’’

Freedman said Forbidden Love’s last start flop in the Coolmore Classic should be forgiven as the filly never got into the race.

“Forbidden Love had no luck in the Coolmore Classic,’’ the trainer continued.

“She had a torrid run, it wasn’t a pretty watch, but she has come through it well and I thought she trialled beautifully the other day.

“We have Dean Yendall booked for the Doncaster as he can ride the weight without too much trouble and he has ridden her before. If the filly gets a start I think with only 49kg on her back she ran run a really good race.’’

Freedman maintains he is comfortable with his decision to send Golden Slipper winner Stay Inside to the spelling paddock and rely on Tiger Of Malay in the Group 1 $1 million ATC Inglis Sires’ Produce (1400m).

“Stay Inside pulled up really well after the Golden Slipper but with the long-term perspective in mind I was happy to stop him,’’ he said.

“The records show a lot (Golden Slipper winners) don’t come back so stopping now gives him every chance to do well as a three-year-old.’’

The Freedman’s decided against starting Tiger Of Malay in the Golden Slipper and the colt goes into the Sires “on fresh legs”.

“We focused on the Sires with Tiger Of Malay, he has had a nice preparation and goes in third-up,’’ Freedman said.

“I think he has come on since the Pago Pago Stakes (second to Shaquero) and Hughie (Bowman) seemed pretty happy with the colt after his barrier trial win last week.’’