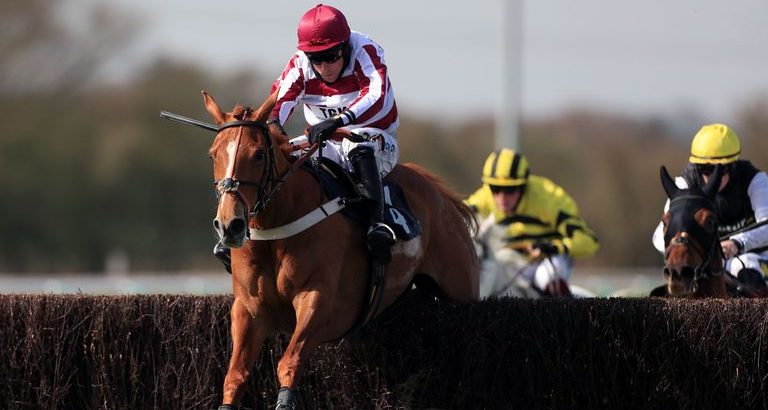 Harry Skelton’s stellar form continued as he kept up his title charge with a treble at Southwell.

Skelton was trailing reigning champion jockey Brian Hughes by three wins going into the meeting, with both riders having full books of rides at Southwell and Hexham respectively.

Skelton got a winner on the board early when taking the first race aboard Gary Hanmer’s Costly Diamond, who sealed a hat-trick of victories when prevailing by a length and a quarter in the biowavego.co.uk And Wave Goodbye To Pain Handicap Chase.

Ridden prominently throughout, the evens favourite took up the lead over the sixth fence and was never passed, holding on to triumph ahead of Nigel Twiston-Davies’ Larch Hill.

The next contest produced another Skelton success, with the jockey this time partnering Olly Murphy’s First Class Return in the Free Tips Daily On attheraces.com Handicap Chase.

Starting as 10-11 favourite, the eight-year-old came to the fore early and was unchallenged when registering a 12-length success.

Skelton was denied three back to back wins when beaten in the next two contests, but Soyouthinksoagain did deliver in the Weatherbys nhstallions.co.uk Handicap Hurdle for his brother Dan.

The victory left Skelton level with Hughes at the top of the table with each jockey on 130 wins, but Hughes’ success aboard Bavington Bob in the fourth race at Hexham saw him edge back into the lead again with over three weeks until the season concludes

“Dan’s horses are flying and I’m picking up a few outside rides. I’m in a very privileged position with a lot of good people around me.

“Obviously you’re always watching, aren’t you?” he said when asked if he was following Hughes’ fortunes at Hexham.

“I’d be lying if I said I wasn’t, but this is a position I’ve always wanted to be in – I’ve dreamt of being here.

“I never thought I’d do it this year, but it’s fantastic and I’m loving it.

Elsewhere on the card, the favourite prevailed in the Sky Sports Racing Sky 415 Standard Open National Hunt Flat Race, with Aidan Coleman in the saddle as the Nicky Henderson-trained Hob House triumphed at 5-2.

From the family of Champion Hurdle winner Epatante and running in the same JP McManus silks, Hob House was making his racecourse debut and Coleman was impressed with the professionalism he demonstrated.

“He felt very well, I delivered him well and he was no real hassle,” he said.

“He was forward enough going into the race and the race went to plan. I committed him a bit sooner than I’d like because one decided to take me on leaving the back.

“I just let him go on then, he was idling a bit up the straight, but he’s a nice horse.

“He was very good, he was very straight and professional.”

Of any similarities between the four-year-old and Epatante, Coleman added: “There’s plenty to like about him. He’s probably not as fast as she is, but he’s got the size and scope to hopefully run over a bit further than she does.”

Rockstar Ronnie was at the head of the market for the Download The At The Races App Novices’ Hurdle and looked likely to be another winner for Skelton, but it was Olly Murphy’s No Risk Des Flos that struck to give Coleman back-to-back wins.

The grey had run with credit in all four prior starts, winning once in a maiden hurdle, and demonstrated his credentials as a future chaser with a good round of jumping and a three-and-a-quarter-length victory.

“He’s a gorgeous horse, he just needed a bit of time, but he’s done his job,” said Ger Tumelty, assistant trainer to Murphy.

“He’s won two hurdles now this season and he’s going to be a lovely horse to go novice chasing with – I’d imagine that’d be the plan next year.

“He was a fresher horse coming into it today, we’re really happy with him and I think he’d probably appreciate a bit further on slower ground.

“He was good enough to win today, that’s the main thing.”

Charlie Todd appeared to escape serious injury as he was unshipped from Dragon Bones in the Sky Sports Racing Virgin 535 Mares’ Novices’ Hurdle.

The filly swerved approaching the obstacle, firing Todd into the hurdle, but the rider walked away from the incident. Padstow Harbour (11-1) took the prize.