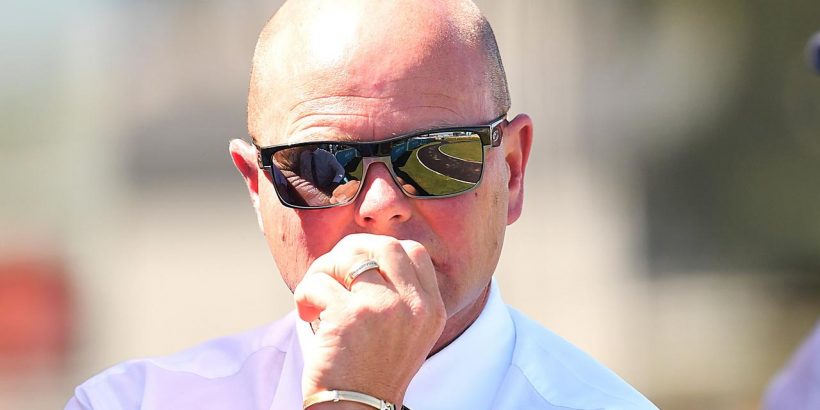 Matt Dunn is hot on the trail of his first Group 1 win and is daring to dream it could be the Melbourne Cup.

Among the 174 entries for the Melbourne Cup is intriguing former British stayer Cepheus, who arrived in Dunn’s Murwillumbah stable earlier this year before being sent to Sydney where he has had two recent trials.

Cepheus, formerly trained by Brian Meehan at the historic Manton Estate in England, has qualified for the Melbourne Cup and was last seen at the races when winning a 2500m Listed race in France last December.

Purchased by OTI Racing, Cepheus is the first import that Dunn has trained straight off the plane from Europe.

The current Melbourne Cup favourite, Incentivise, hails from Toowoomba and now another country town, Dunn’s base in Murwillumbah in far northern NSW, could make a Melbourne Cup mark.

Cepheus was bought for $600,000 but that could be chicken feed if he can make an impact on the spring carnival where he is not only nominated for the Melbourne Cup but also for the Caulfield Cup and the Cox Plate.

“OTI has been looking for a horse for me for a while, to get straight over from Europe, and he is the one and he’s a pretty nice horse,” Dunn said.

“He has been with me for about four months, he actually came to Murwillumbah first and spent a couple of weeks there.

“This is the first import I have had from scratch, that’s come straight to me, I have probably had five or six imports that have come from other stables.

“This horse has got the ability to quicken, he has got a great turn of foot.

“I think that is what Terry Henderson (OTI boss) goes looking for, horses that can go faster when you ask them to, not the one-pacers from Europe who seem to come here and not be much good.

“Even when Cepheus was getting beaten in Europe, he showed he had a terrific turn of foot and he has showed that in both trials he has had in Sydney.

“He can really let down and reel off some quick sectionals.

“These imports need to be able to go faster when you ask them to and Cepheus certainly does that.”

It might be a perfect year for Cepheus, who has been in Australia for some time, to launch a Melbourne Cup assault given that new rules on international participation will make it tougher for international spring hopefuls who are yet to arrive.

As a result, it could be a weaker Melbourne Cup.

Dunn, chasing his first Group 1 winner, doesn’t shy away from the lofty aspiration of the Melbourne Cup being his goal with Cepheus.

“The ultimate dream is to get him to the Melbourne Cup, that’s why we bought him,” Dunn said.

“He has done what he needs to do to qualify for the Melbourne Cup and he now just needs to get his rating up.

“Normally these imports take a preparation to get used to Australian conditions and track surfaces, but he is a bit different to that.

“He has got here and gone straight on with it, although race day will be the test.

“All I can say is what I am seeing at home and at the trials is pretty exciting.”

Cepheus is likely to kick off his campaign Down Under in Sydney on either Saturday week or Saturday fortnight.

TAB has Cepheus as a $101 chance in betting in the Melbourne and Caulfield Cups and at $51 in the Cox Plate.

Cepheus is a son of Sea The Stars who is looking to build on a promising European career which netted three wins from 10 starts.

He has never raced over further than 2500m but Dunn feels the 3200m of the Melbourne Cup is unlikely to be an issue.

“You could put a 10-year-old kid on him to ride him, he is that quiet and casual and relaxed and that happy to do whatever we need him to do,” Dunn said.

🏆Cepheus wins the opener at Goodwood

🥇 A winner for Trainer Brian Meehan and Jockey William Buick

📈 At a BSP (Betfair Starting Price) of 8.2pic.twitter.com/14lxnMLqnm