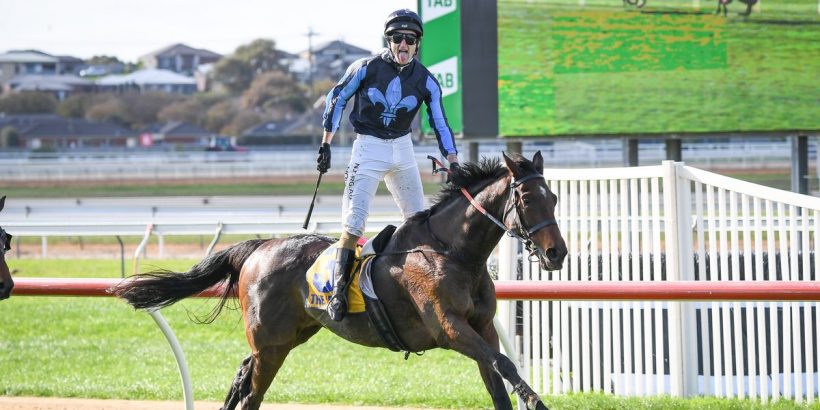 A jockey was fined a quarter of his winnings for a victory celebration before his horse galloped past the post.

Darryl Horner Jr had his earnings docked by stewards following the success aboard Flying Agent in a £83,000 feature race in Australia on Tuesday.

The rider, deputising for his injured brother Lee on the Brierly Steeplechase runner at Warrnambool, Victoria, was thrilled with the performance – and wanted to show just how much it meant.

With the winning line approaching, Horner Jr stood up in his irons and pointed down towards his mount, who was sent off the race favourite.

Keeping his left hand on the reins, he turned to the crowd and waved his whip with his right arm.

Horner Jr said: "It got pretty emotional over the line because Lee and Amy (McDonald, the trainer) work pretty hard and I know Lee loves this horse.

"It's one of his favourites but he obviously couldn't ride him, so it's rewarding that it could be me.

"He fell off at Terang and broke his ankle in two places.

"Obviously, he did all he could to be back and realised he couldn't be, so I stepped in, rode he horse in a couple of trials and won on him at Hamilton and now here we are."

Horner Jr's fine was added to a punishment of £166 for excessive use of the whip, handed out after an earlier race.

Punters were stunned that the stunt on Flying Agent cost the jockey a significant amount of cash.

One said: "$1000. Absolutely laughable. Can't have fun or enjoy any celebration. The fun police at it again."

While another added: "I've got $100 to help pay the fine. Anyone that knows him can you get him to get in touch."