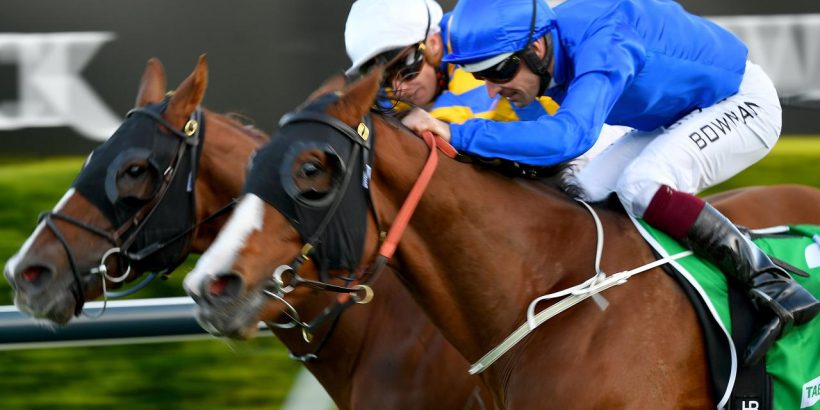 Kerrin McEvoy is intent on avenging Godolphin gelding Phaistos’ narrow defeat in last year’s Scone Cup and bag himself a second win in the town feature in its Listed era.

McEvoy, who counts three Melbourne Cups and two Everest’s on his C.V, won his first Scone Cup in 2012 riding another of the Sheikh Mohammed string – Raspberries.

His only ride on Phaistos was a nose second at Randwick in 2020 two starts prior to the James Cummings trained five-year-old’s short head second in the Scone Cup.

Phaistos’ march to the 2021 version kicked off with a now trademark barnstorming run at Randwick on April 24 when an eye catching fifth to Rocha Clock.

“It’s a race that I am sure James had on the radar second-up,” McEvoy said.

“He put in a good run first-up. He was back in the ruck and made up nice ground to be beaten only a length and a half so I think second-up, this race looks a suitable target for him.

“He has got a good second-up record so he goes in there with a nice chance.”

While McEvoy has only ridden Phaistos at one of his 23 starts so far, he rode the horse’s sire, Helmet, in all bar one of his 13 appearance including in the Caulfield Guineas and both his Sires’ and Champagne wins.

Famously flashy and headstrong, Helmet’s worst career run was in far off Dubai where he clocked in two dozen lengths from the winner but not without good reason as McEvoy recalled.

“I was actually talking to Huey Bowman about this the other day,” McEvoy said.

“We got into a nice rhythm and then there was a car on the inside of the track on the rail doing the live vision and Helmet spotted that at the mile marker and that just fired him up and he overdid in front and we were beaten on the corner.”

Smart mare Asiago can resume from a let-up with a win in the Dark Jewel Stakes. Photo: Darren PatemanSource:AAP

“It’s great to see him doing well at stud, he is really stamping his stock.”

McEvoy, meanwhile, is also aiming to collect a second Dark Jewel Classic when legged aboard another of the Cummings lot in Asiago.

A winner of more than half a million dollars, Asiago was last seen finishing down the order, but not far away from Gem Song and her subsequent Doncaster Mile winning stablemate, Cascadian, in the Group 3 Newmarket and Newcastle on March 5.

“Huey rode her in the trial and she finished on really well,” McEvoy said.

“She has drawn nicely and she has got a good first-up record.

“She ran really well in Group 1 races like the Empire Rose and wasn’t beaten far in The Hunter last year behind Sweat Deal and that’s a good formline.”

Once again, Friday will be only the second time McEvoy has ridden Asiago on race day but he should know what makes her tick given association with her mum, Disputes, whom he steered to a close fourth in the 2011 Magic Night Stakes.

John Messara could still play a cameo role at Friday’s Scone Cup meeting despite being centre stage in Adelaide on Thursday night where he will be inducted into Australia’s Racing Hall Of Fame.

Messara hasn’t missed many Scone Cups dating back to when they packed out the old White Park racecourse not far from his Arrowfield Stud.

There will still be a Messara presence at Scone with son Paul on duty to saddle-up two of the stable’s runners including his father’s incredibly well-bred last start winner, Lady Patricia.

“I would have liked to have been in Adelaide but we have a lot of clients and friends up for the carnival and the races that are staying over the weekend,” Messara said.

“It’s a big thing for the family and a great thing for Dad. He has put a lot into the game for the industry and Arrowfield and is very passionate about the industry as a whole, both racing and breeding, so it’s nice to be recognised.”

John Messara has owned better quality racehorses than Lady Patricia but not many of them can claim to be better bred than her.

Not only is she a daughter of the current four-time Champion Sire Snitzel, she is a full sister to the Group 2 winner Spill The Beans and a half to Group 1 winner Kenedna.

On top of that, her third dam is Who Can Say, the mother of Hall Of Fame legend Tommy Smith’s own Bounding Away.

Lady Patricia justified her odds-on quote when posting her second career win in a 1250m Class 1 at Gunnedah 11-days ago setting her up beautifully for the Yarraman Park Class 2 Handicap (1100m).

“She was too good at Gunnedah,” Messara said.

“She loves the firm tracks and that’s only caveat on Friday as how firm the track will be, We have had a fair bit of rain up here this week and the sting in likely to be out of it; the harder it is the better she goes.”

(Paul) Messara’s other runner at Scone in the former Victorian mare Charvet who tackles the Newgate Class 1 Handicap (1100m).

“She had her first start for us last start and was very good,” Messara reported.

“She has come on well from the run and I think she will be competitive.”