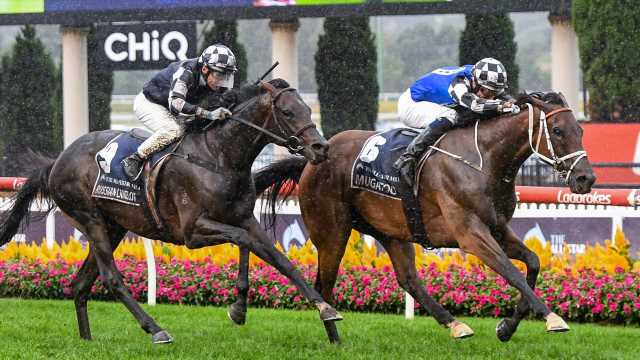 Kris Lees will use Saturday’s Group 1 Doomben Cup (2000m) to springboard popular galloper Mugatoo towards another Cox Plate with the Newcastle trainer utilising the winter carnival’s ideal spot in the calendar.

Faced with the prospect of sitting in a paddock or competing for $700,000, connections easily chose the latter and it sets up a showdown with Cox Plate winner Sir Dragonet and flying import Zaaki who is coming off a dominant Hollindale Stakes win at the Gold Coast.

“The Cox Plate is a long way away, we were thinking if we sit around waiting until then it is a long time,” he said. “We may as well give him this run now and it gives us a nice five-week gap (since the Queen Elizabeth).

“In saying that, it is a good race, it is a Group 1 over 2000m so it suits him. He is an older horse where we have spaced our runs with him so he can bounce off this and have a couple of lead ins to a Cox Plate.”

Lees will be looking for his second Doomben Cup in four years after winning with Sense Of Occasion in 2017.

While Sense Of Occasion struggled to reach the heights Mugatoo has, Lees said they carried a similar profile into the race.

If he was to win, it would be Mugatoo’s first Group 1 having never won at the top level.

“We have had a little bit of luck, we won the Doomben Cup four years ago with Sense Of Occasion, he was a horse in a purple patch of form who profiles a little similar to this bloke,” he said.

Holding an entry into the inaugural $1.2 million Group 2 Q22 (2200m) on Stradbroke day, Lees said it was undecided on whether they would push on further into the winter.

Mugatoo has proven he can reach deep into his bag of tricks depending on the distance of the race, having won over 1600m in an All-Star Mile but also 2300m at Doncaster when trained in England.

“He won an All Star Mile and he also won over 2300m so this looks the right distance for him but it all comes down to the opposition he is up against, the pace in the race and all those variables,” Lees said. “I am comfortable with him over the 2000m.”

Lees – who also has a Gold Coast stable – expects to have a strong presence on the day with a host of chances on the undercard.

“I will have Special Reward in the BRC Sprint and Itz Lily in the Fillies and Mares race and a few others up there from the Gold Coast base,” he said.

It comes as Lees had a breakthrough with his expensive gelding Midland which won the $300,000 Inglis 3YO Guineas at Rosehill on Saturday.