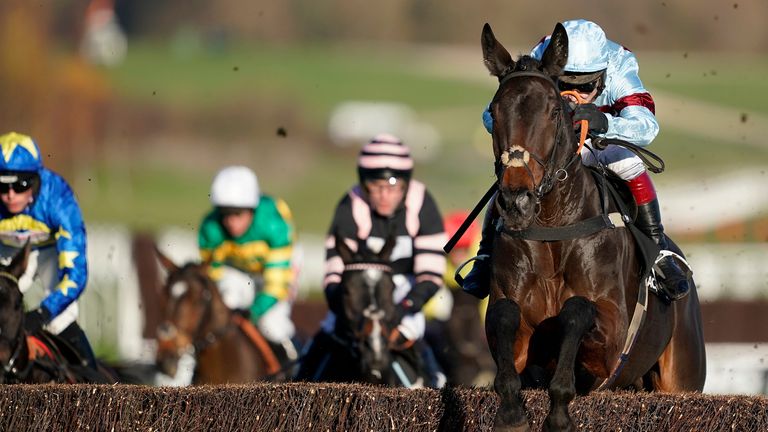 Kayley Woollacott is keeping her fingers crossed Lalor can bounce back to his brilliant best in the Caspian Caviar Gold Cup.

The Grade One-winning hurdler looked a potential superstar in the making when producing a stunning display on his chasing debut at Cheltenham in November of last year.

However, little has gone right for the seven-year-old since, with Dynamite Dollars emphatically reversing the form at Sandown next time, while Lalor looked a shadow of his former self at Cheltenham and Aintree in the spring.

His comeback fourth in last month’s Haldon Gold Cup at Exeter was not devoid of promise, though, and Woollacott hopes the combination of some work with jumping guru Yogi Breisner, a step up in trip and the application of cheekpieces will help Lalor rediscover his best.

“He’s been fine since Exeter and the way he ran that day suggested he wants a longer trip these days. We’ve always felt he would stay further in time, so we’ll give it a go,” said the Devon-based trainer.

“He actually did a bit of work with Yogi Breisner last month and we felt a pair of cheekpieces might just help him travel a bit better in the early part of the race.

“On his best form he is probably well handicapped and he’s always been a bit in-and-out – he didn’t win a race over hurdles until he won his Grade One at Aintree, that’s just him.

“We know he’s a very good horse on his day. I just hope they don’t get too much rain.”

With ante-post favourite Riders Onthe Storm declared a non-runner in error on Friday morning, some bookmakers now have the Venetia Williams-trained Cepage at the head of the market.

The son of Saddler Maker was runner-up to Riders Onthe Storm at Aintree last month and was also second to Frodon in this race a year ago, but returns with the welter burden of 11st 12lb.

“We’ve been happy with him since Aintree, where he ran very well,” said Williams.

“He’s not the biggest horse in the world to be carrying top-weight, but he’s in good form.

Gary Moore fires a two-pronged assault, with Benatar and Knocknanuss both interesting on the pick of their form.

Benatar has not been seen since finishing tailed off when favourite for a race won by the brilliant Cyrname at Ascot in January.

Moore said: “This has been the plan for Benatar for a while and he seems in a good place with himself, so we’re hopeful.

“He obviously has some good form to his name, but he does have some making up to do.

“The other horse would look to have every chance, I just hope the ground isn’t too heavy.”

Dan Skelton also has a couple of chances, with Spiritofthegames and Not That Fuisse both featuring in a field of 15.

“Spiritofthegames has frustrated me as he has just lacked a bit of form recently,” said Skelton.

“I really fancied him for the BetVictor Gold Cup, but the ground was horrendous that day. He then just ran ordinary at Newbury. He is just struggling for form, so it is hard to be too confident.

“Not That Fuisse has had three nice runs in novice chases. Stepping back up to his trip off 10st 2lb, he should go well.”

The Willie Mullins-trained Robin De Foret bids to become the first Irish raider to claim this prize since Noel Meade’s Sir Oj in 2005.

Patrick Mullins, assistant to his father, said: “He has some good novice form behind Burrows Saint and Le Richebourg and has never been out of the money bar his one fall in Cork in November of last year.

“It’s a hard ask on his first run of the season and first handicap, but the owners were keen to go.”

King said: “I just felt at Ascot he didn’t quite get home over the three miles. I was very pleased with the run, though, and he jumped superbly. This trip should be ideal and the conditions will suit him fine.”