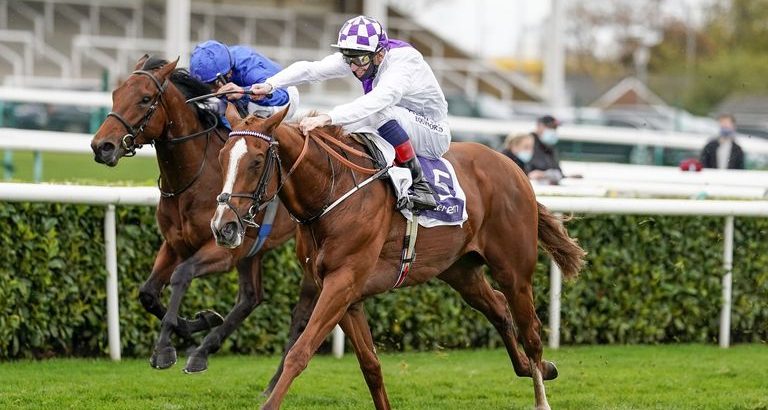 Jim Bolger’s firm belief that he has two star colts on his hands this season could be further advertised at Leopardstown on Sunday, with Mac Swiney set to carry his hopes in the Derrinstown Stud Derby Trial.

Stablemate Poetic Flare has already won the Qipco 2000 Guineas, and the County Carlow trainer has been keen to stress he finds it hard to split the pair – a statement with which jockey Kevin Manning concurred at Newmarket on Saturday.

Speaking after the Guineas, Manning – asked to compare Mac Swiney and Poetic Flare – said: “The two of them have been working well, and I rode the two of them on the grass in two separate bits of work three weeks ago and Jim asked the question and said if both turn up (at Newmarket) which would you ride – and I said ‘I don’t know’.”

A son of Bolger’s Derby winner New Approach, Mac Swiney took Group One honours when beating One Ruler in the Vertem Futurity Trophy at Doncaster in October.

Chief among his potential opposition this weekend is the Aidan O’Brien-trained Bolshoi Ballet, winner of the Ballysax Stakes on his reappearance.

The Ballysax-Derrinstown route is one familiar to O’Brien with his Derby runners – Galileo winning both races on the way to glory in the premier Classic 20 years ago, while High Chaparral did likewise 12 months later.

O’Brien has also entered Derby favourite High Definition, although he is thought more likely to run at Lingfield on Saturday. Chester defector Sir Lamorak is another among the possibles, which total 15 at the entry stage.

There are also 15 in the Irish 1,000 Guineas Trial, including the Ger Lyons-trained Acanella.

The Juddmonte-owned Dansili filly looked potentially smart in beating Jessica Harrington’s Climate – who could reoppose – over this course and distance last month.

The other highlight on a top-class card is the Amethyst Stakes – which features the O’Brien-trained Lancaster House, among 11 entries.