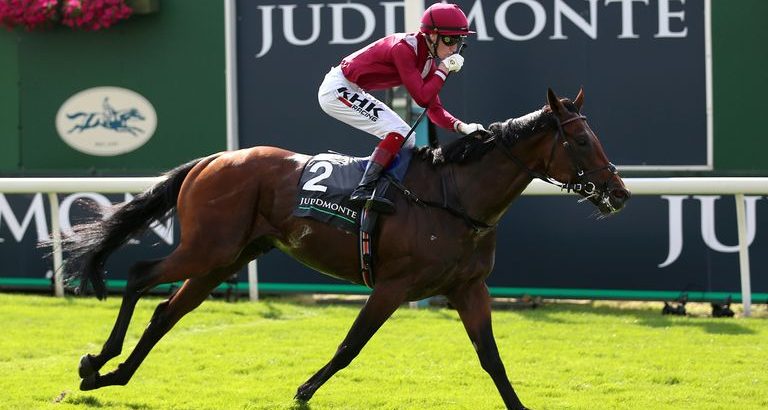 Mishriff landed his first domestic Group One triumph with a brilliant performance in the Juddmonte International Stakes at York.

Winner of over £10.5million in prize money, mainly due to his wins in the Saudi Cup and the Dubai Sheema Classic, the John and Thady Gosden-trained four-year-old added another £567,000 to the kitty with a blistering six-length success in the extended 10-furlong showpiece.

Mishriff left the opposition standing in the closing stages under a confident ride by David Egan to execute a long-term plan by connections.

Alenquer was smartly away but Mac Swiney took up the running once the field settled down with Love third and Mishriff just behind.

There was little change in the order until the long straight where Mishriff (9-4 favourite) cruised into contention.

Once let down by Egan, the Prince Faisal-owned colt drew away, scoring impressively from Alenquer. Love was half a length adrift in third.

Mishriff had previously finished third in the Eclipse at Sandown and second in the King George at Ascot, but John Gosden felt the colt had his optimum conditions on the Knavesmire.

He said: “His first run back, he’d been freshened since his winter campaign and he was a little full of himself and got tired, blew up if you like, in the last furlong. He ran a great race in the King George, probably stretching his stamina in that race, but it was a lovely race.

“This is his ground, good ground, and I think a mile and a quarter is perfect for him.

“He’s had this strange year where he raced in a truncated season last year, then he raced in the winter and we gave him a holiday, now he’s run in the middle of summer.

“If I’m going to go deep into the autumn, I’ve got to take a pull with him, freshen him again through September, then you could look at either the Arc or the Champion Stakes and then you have races like the Breeders’ Cup and the Japan Cup.

“He’s having to run in sort of segments with holidays in between.”