Ciaron Maher could change plans for quality two-year-old Tanker if he delivers for punters in the Golden Gift at Rosehill on Saturday.

The Debutant Stakes winner has been made a $3.40 favourite for the $1 million early-season juvenile affair and is part of trio of runners for the Maher and David Eustace yard. 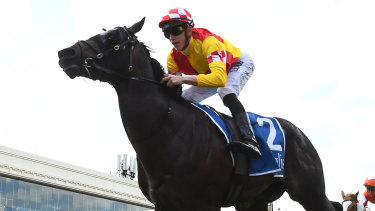 The Magic Millions purchase might not head to the Gold Coast if he wins on Saturday as it would qualify him for the Blue Diamond and Golden Slipper.

“With your best colts, you are always looking at the Golden Slipper and working back. If he was to win, you would know you are in the Slipper, so we would plan the best way to get there,” Maher said. “That would probably mean break. It is a big prize for the winner in the Golden Gift.”

Tanker showed a change a gear in the Debutant Stakes after cruising in behind the leaders, and the margin of 2½ lengths could have been much more.

It was a professional display that was a building block for the future. Ben Allen has followed Tanker to Sydney in a sign that the Pride Of Dubai colt is fairly handy.

“It was a good start for a horse we syndicated to clients, and it's exciting for them to be running in a million-dollar race at his second start,” Maher said.

“He is up with our best colts at the moment. He won at Caulfield so impressively, but he has continued to step up since.

“He was good in a trial in Sydney, and he has certainly come on since he has been up there.

“I’m confident he can run well but, with two-year-olds, it can be a bit of a guessing game. The thing he has in his favour is that he has done it already and seems to be better for that run.”

Tanker holds his spot at the top of betting but could be challenged by Peter and Paul Snowden’s first starter Blaze A Trail if the flow of early money continues. The son of Criterion has been  $6 to $4.60 at Beteasy.

While Tanker delivered, Anders didn’t live up to Maher expectations on debut, when well fancied and well beaten in the Kirkham Plate two weeks ago. He started $2.70 at Randwick and is a $19 chance for the Golden Gift.

Maher has reached for the blinkers for $670,000 Magic Millions purchase, which is eligible for the ladies bonus on the Gold Coast in an attempt get him back on track.

Anders led and compounded to run fourth in the Kirkham but Maher has seen enough talent in him from his trails.

“I expected more from him. You walk away disappointed and just need to try something to get him to focus,” Maher said.

“He has drawn well and I expect improvement, but you want to see them do it before being confident.”

Cellsabeel completes the team for Maher, who is concerned about the wide draw with him.

“He has shown us good potential at home but it is tough when you draw the outside in a big field on debut,” Maher said.