The feature race of the Breeders’ Cup meeting has eluded O’Brien, with Giant Causeway’s neck second to Tiznow in 2000 the closest any of his 16 runners have come to winning the $6million dirt track contest.

But since Mendelssohn was a tailed-off last behind now-retired Justify in the Kentucky Derby in May when the dirt track at rain-lashed Churchill Downs rode sloppy, O’Brien has single-mindedly focused on a tilt at the Classic. 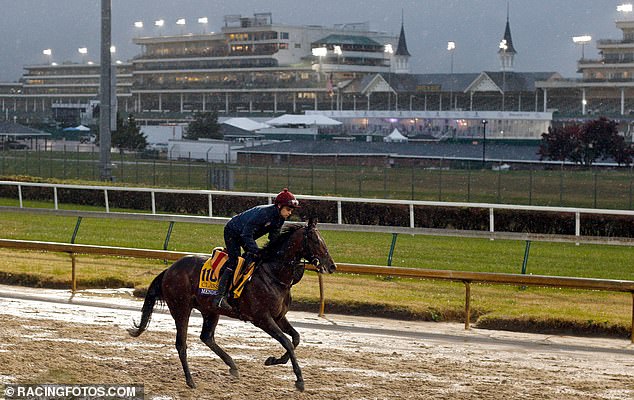 Unlike O’Brien’s past runners — which have included some of his best horses such as Churchill, Galileo and Gleneagles — Mendelssohn, who won the Breeders’ Cup Juvenile Turf last year, has been given a race-hardening US dirt campaign.

His three dirt races since being swamped in the Kentucky Derby included a two-length third to Discreet Lover in the Jockey Club Gold Cup at Belmont Park in New York when jockey Ryan Moore engaged in a suicidal pace-setting battle with proven fast-starter Diversify in an apparent attempt to battle-harden Mendelssohn.

O’Brien, whose filly Magical looks the biggest threat to John Gosden’s dual Arc winner Enable in the $4m Turf tomorrow, said: ‘It is a different preparation than we have ever given them before. We have taught Mendelssohn to race hard and fast.

‘He is in a better place now than before the Kentucky Derby because he has had more experience and knows what is expected.

‘You are very lucky if things happen by accident but they usually don’t. We felt we did have to do something different. We live at the other side of the world and it is a different racing culture. The racing here is strong, hard and aggressive,

‘We were happy with the run at Belmont. What we loved about Mendelssohn was that he didn’t surrender. He did not wilt.’

Mendelssohn and the rest of the O’Brien Breeders’ Cup team had their first exercise on the rain-lashed track yesterday. Fortunately, conditions are expected to dry out. O’Brien can give the Europeans a flying start at the meeting tonight with speedy Sergei Prokofiev in the Juvenile Turf Sprint.

He is worried about the wide draw for Dewhurst Stakes third Anthony Van Dyck in the Juvenile Turf.

He should be equally concerned about the solid form of Line of Duty, who has leading claims for Godolphin trainer Charlie Appleby.