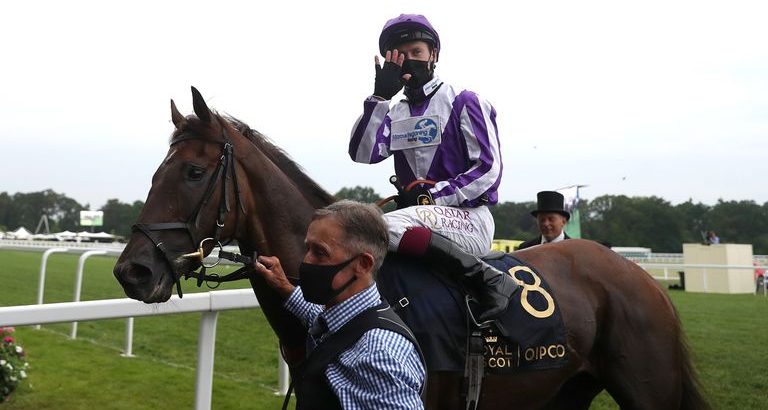 Derby-winning trainer Tregoning had endured a drought since High Accolade won the King Edward VII Stakes in a year he saddled a double, with Nayef – possibly the best horse he ever trained – winning the Prince of Wales’s Stakes.

Perotto had his stamina to prove racing over a mile for the first time – which was a marked rise in trip from his two-year-old days when he even ran over five furlongs in the Flying Childers.

Settled at the rear of the pack by champion jockey Oisin Murphy, there was little between the two groups and Perotto made a bold move a furlong out.

Joseph O’Brien’s Liffey River was charging home late but failed to get there by half a length, with Quintillus and Dubai Honour fourth.

Murphy said: “I thought I was Jamie Spencer and missed the break by a couple of lengths. I tacked over to the rail and followed William Buick which was the right decision.

“He put his little head down and his ears back when the pace collapsed. He hit the line hard and could be a horse for Hong Kong.”

He added: “I don’t team up with Marcus very much, but he’s a top trainer with a small string and an absolute gentleman.

“This horse was very well prepared today, he gave me a super ride, I’m thrilled, these races are hard to win.

“He stuck his head out, I wasn’t sure about a mile and I rode him very cold.

“I wasn’t given any instructions, but I’m glad it worked out.”