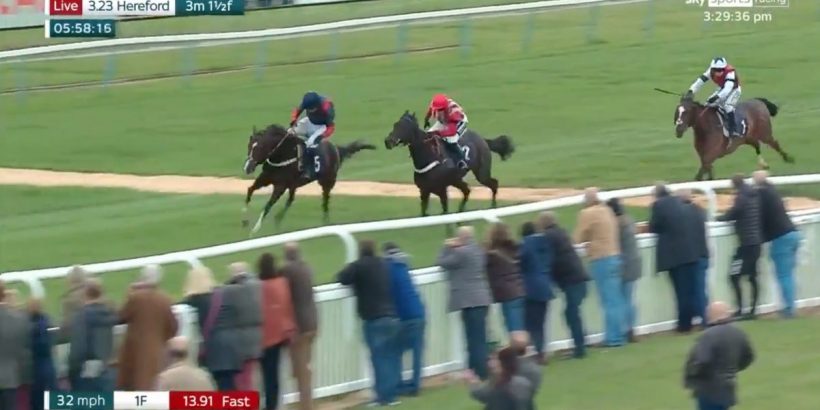 Favourite backers breathed a sigh of relief when Paddy Brennan survived a late scare to win at Hereford.

The top jockey nearly came off 11-10 shot Presenting Yeats in the closing stages of the Central Roofing Handicap Hurdle.

Up until that point it had been hard work for Brennan, taking his only ride at the track, as the lowly-weighted runner raced lazily,

Given encouragement from the moment the tapes went up, Presenting Yeats disputed the lead but made his rider work for his fee.

On and off the bridle throughout, the Milton Harris-trained runner was clearly in front after a circuit and punters would have been happier with the way he was going.

However heading down the back straight, once again the five-year-old was travelling the least fluently of the five runners.

Abbie McCain sensed a winning chance aboard Morraman (11-2) and her horse was going best on the final turn.

The young rider and Brennan had a terrific battle, as Presenting Yeats continued to press his rival.

Under the Brennan drive, he stayed on determinedly to poke his head in front – but then had the path on the racecourse to cross.

With just yards to go, Presenting Yeats tried to jump it and stumbled, a blip which nearly dislodged his jockey.

Brennan could be seen dipping over to his left and clinging to his reins, before he righted himself to get the gelding home in front by less than a length.

TV footage from Sky Sports Racing showed him standing up in his irons as he crossed the line on the hotshot, backed in from 6-4 in the betting.

Punters could be heard cheering him on as the young staying hurdler fought back to defeat the runner-up.

Backers were just as pleased on social media and one said on Twitter : "What a ride from Paddy Brennan. I was shattered just watching him."

A second added: "Paddy Brennan just wouldn't give in and holds on to win."

Four of the seven races on the card were won by favourites, however Sam Twiston-Davies, a hero to punters for his ride on Wigglesworth last week, suffered a reverse in the finale.

Tiger Orchid, the 1-2f, did not jump as well as Jersey Lady – and lost by a length-and-a-half.

At Leicester, Will Buick's treble cut Oisin Murphy's lead in the jockeys' championship to four.

The competition ends on Saturday and Murphy could only manage one winner on the day.

Both sportsmen are in action at Nottingham on Wednesday.

Grosvenor Sport is offering new customers the chance to get £30 in FREE BETS when you bet £10 on horse racing.

Simply register, place you £10 bet on horse racing and you will receive £30 in free bets.