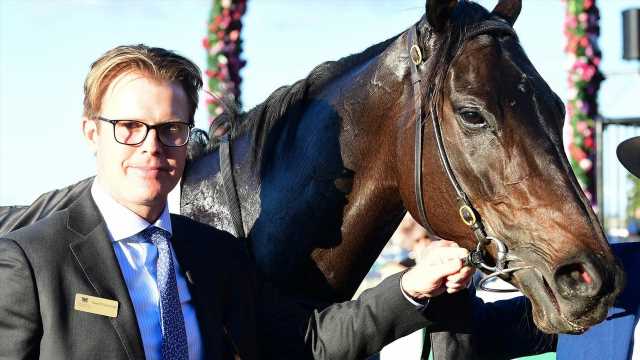 Australia’s greatest racing dynasty has added another chapter after Edward Cummings landed his first Group 1 with Duais in the Queensland Oaks at Eagle Farm on Saturday.

While the young trainer carries a famous surname, he has always done it his way and Cummings made it clear Duais’ victory was a result of blood, sweat and tears rather than riding on the coat-tails of his family before him.

After delivering a perfect ride from a wide barrier, jockey Hugh Bowman will also get the chance to bring up his 100th Group 1 win in next Saturday’s JJ Atkins aboard Port Louis after winning the Oaks for the first time since Winx in 2015.

Duais storms home to win the Queensland Oaks for @edancue with Hugh Bowman in the saddle at @BrisRacingClub Eagle Farm! pic.twitter.com/hvVsLjB23u

Cummings now has a serious spring contender on his hand and the 35-year-old grandson of Bart, son of Anthony and brother of James will keep doing things his way.

“We did it on our own, is that the sweetest part of it? Absolutely,” he said post race.

“Nothing is ever given for free in our family. You can say what you like about anyone of us but we all worked our arses off to be where we are.

“We can all be very, very proud of ourselves. There is a certain amount of grit in our family and we thrive under pressure.”

Cummings always had an air of confidence about his filly heading into the race – comparing it to having a knee-trembling putt to win a golf major so Saturday’s demolition job was the equivalent of putting the ball straight into the centre of the cup.

“It has been an interesting experience. I thought she could win that way and I am glad she did,” he said.

“A win like that obviously makes you think about bigger prospects in the spring.

“There is something about this game that makes you want to get up the next day and work harder and be stronger and prove it again and again. Whilst I am very thankful for the opportunity and thrilled with today’s result I know there is a lot of hard work in front of us.”

Duais powers to victory in the Oaks at Eagle Farm under the riding of Hugh Bowman. Picture: Trackside PhotographySource:Supplied

Bowman rode Duais like the best horse in the race and delivered in spades after being dealt barrier 11 at Tuesday’s draw.

Settling last on the fence, the champion hoop cooly wove a passage before a gap appeared at the top of the straight, putting the race to bed 250m from home, beating home Charms Star and Signora Nera.

“It means a lot to me to give him his first Group 1 win,” Bowman said.

“It’s of no surprise this filly has done this and I think the best is still ahead of her.

“Edward deserves all the accolades, to have the patience not to race her before the Oaks and deliver her here in a Group 1 race it shows enormous maturity.

Cummings and Bowman with the Oaks trophy. Picture: Trackside PhotographySource:Supplied

“He has maturity beyond his years as a horse trainer and this is the start of a very bright future for him.

“He has been around the game his whole life. He might not have decided quite as early as to be a horse trainer but from the time he did decide, you can see the way he takes everything in – like all the Cummings before him he asks a lot of questions and what he takes from them I am not quite sure.

“Maybe if I hang around the family long enough, I will know myself.”

After starting second favourite, trainer Mark Newnham said he wasn’t sure what to make of Bargain’s fifth after travelling sweetly in the run.

“She never really let down as she looked reluctant to go between horses, I'm not sure what to make of it,” Newnham said.

Of the rest, Varda ($4.60-$6) was the only other horse outside of the favourite to hold six-figures.

Charleise made her backers sweat for it in the Nuturf Spear Chief Handicap (1500m). The Maher & Eustace-trained galloper was planted three-wide the trip and had decent support riding on her. She went around as the third most popular galloper in terms of money held behind Luvoir ($5.50-$2.80) and Groundswell ($3.50-$4.40).

In-form mare Nudge finished best for Chris Waller to take out the Magic Millions National Classic (1600m). Although popular with TAB customers, Nudge was a drifter on the day and went $4 out to $5.50 at the jump. Ridden by Kerrin McEvoy, Nudge was just one of two horses that held six figures with TAB Fixed Odds with popular mare Nettoyer being the other.

Nettoyer was crunched in betting, especially late, and firmed from a quote of $5.50 in the morning to jump a $3 favourite.

The money was spot on in the James Squire Queensland Oaks (2200m). Duais was sensationally supported throughout the day, firming from $4.80 in the morning into $2.80 at the jump. Such was the support for the Ed Cummings-trained filly that she held 2½ times the amount of money on raceday than any of her competitors.

The biggest bet on the winner was $20,000 taken on Friday in the lead-up to the Oaks, with the punter collecting a whopping $110,000 as a result of Hugh Bowman timing his run to perfection.