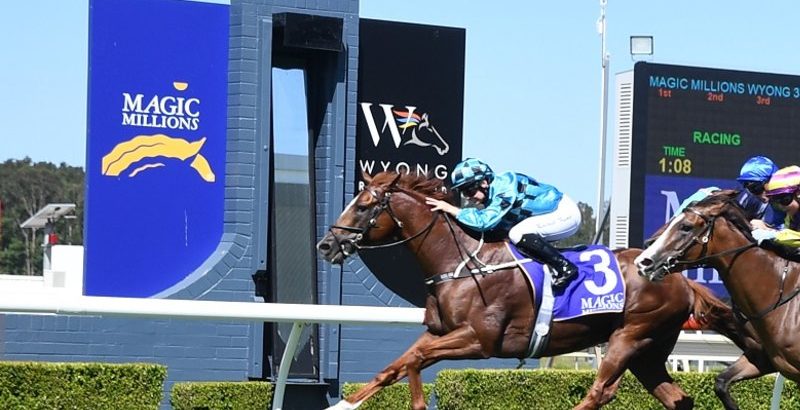 Selections based on a heavy to soft track. Monitor for bias/pattern.

2. I Am Geronimo led at a strong tempo at this track/distance nine days ago and was brave in defeat, running second and beating the rest easily. 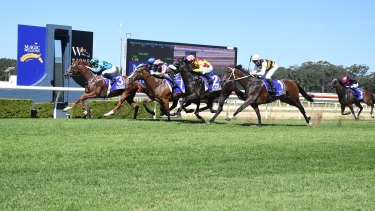 Racing returns to Wyong on Thursday.

Further, that race rated highly relative to the day, and the decisive margins confirmed the quality. The three-year-old gelding has always promised ability and expect jockey Brenton Advulla to execute similar tactics to last start. In addition, he gets his chance to break through for his maiden win with a positive race setup.

Dangers: Debutant 3. Jumeirah Beach has trialled well enough in preparation for this assignment. The Gai Waterhouse & Adrian Bott-trained galloper led in his latest heat and was ridden out to run second at Hawkesbury in solid time. Expect an aggressive ride early, and he is a key late market watch. 6. Taking The Mikki had every chance last start at Grafton but sprinted strongly and tried hard.

Additionally, he brings a competitive last start figure and can rate to win. 7. Nullify is consistent and has a starting price profile edge over some of her rivals. She maps to have all favours from barrier one and jockey William Pike rides for the first time. First starter 4. Phosphene had a quiet trial and will hit the line hard.

How to play it: I Am Geronimo WIN. Odds & Evens: SPLIT.

3. Danzette resumes and has trialled well enough recently at Hawkesbury. The four-year-old mare was solid in her latest campaign and produced figures that could win this event. She maps well and can sprint fresh.

Dangers: 8. Uninsurabal was checked/blocked at critical stages in the straight last start at Grafton and ran ok. She is a rock-hard fit, will roll forward, and in-form jockey Reece Jones rides. 7. Sonny has been a victim of circumstances his past two starts. He can bounce back with a significant barrier change and a favourable map. 1. Loniesha has been racing in stronger grade and is a definite chance. 4. Limpida isn’t proven at the distance but has strong form lines for this race.

How to play it: Danzette WIN. Odds & Evens: SPLIT.

2. Pacific Warrior resumed at Hawkesbury 11 days ago in a fast-time race and was honest in defeat. The three-year-old gelding had slight excuses throughout transit but never shirked the task to the line and battled on well for fifth. He will be fitter for that effort, suited over a further distance, maps to control the pace, and coming out of a high-rating race. Expect him to give a sight.

Dangers: Forget 1. Adorable Miss last start where she was heavily backed $2.40-$2.00 late in the trade but her saddle slipped, leading to her failing. Before that start, she arguably should’ve won and looks well-placed on a drying track. 3. Nosey Park got too far back on debut at Scone and hit the line hard, running one of the fastest final 200m splits of the meeting in 12.55. The Paul Perry-trained galloper receives a senior rider in William Pike, and the rise to 1600m is ideal. Add 8. Riccos to trifectas and first fours.

How to play it: Pacific Warrior WIN. Odds & Evens: SPLIT.

8. Sightseer sat outside the leader at a fast pace and raced well on debut at Newcastle. Moreover, the colt was honest in defeat and tried hard to the line running his final 200m split in 12.33. To further the merit of his performance, that race rated the highest overall relative to the meeting when historically comparing time, class and additional factors with decisive margins throughout.

The two-year-old has since trialled well in a fast time heat and beat the rest easily. He will have time to cross from the wide draw with the 1300m start coming out of the back chute with a considerable run to the first turn. In addition, he brings the best last start figure, and repeating that effort will make him hard to catch.

Dangers: 15. Ring Ahoy resumes as a gelding and has trialled well enough at Warwick Farm on the synthetic track. The Chris Waller-trained galloper always indicated he would come back improved in his second preparation and is suited to going in the clockwise direction.

Expect him to take a forward position and be within striking distance when the sprint goes on. 1. Align The Planets and 12. Smart Vengeance will likely settle worse than midfield, but both can sprint strong closing sectionals and may have the last shot. Add 10. Highland Cathedral to trifectas and first fours.

How to play it: Sightseer WIN. Odds & Evens: SPLIT.

6. Golden Gate was heavily backed $2.70-$1.90 last start at Goulburn but was slowly away and raced slightly flat relative to her dominant first-up win. Further, she settled at the rear of the field in an even tempo and chased hard to run on into second place.

Before that start, she bolted in running time and ran the fastest final 600m split of the entire meeting in 35.58. The three-year-old filly receives key gear changes for this event, and jockey Andrew Adkins retains the ride.

Dangers: 1. Siyata had every chance last start at Kensington 29 days ago and was honest. The mare drops significantly in grade, races well fresh and maps to have all favours. Expect a bold showing. 2. Uncaged had all favours breaking through for his maiden win at Hawkesbury last start but sprinted strongly.

4. Highly Ambitious has a tricky draw, but the blinkers go on for the first time, and she has ratings to win. Additionally, she must go in all exotics. 3. Zeminnika resumes and has trialled well. She will roll forward and the drying track suits.

How to play it: Golden Gate WIN. Odds & Evens: SPLIT.

9. Bullet Wing had every chance last start in a high-rating race at Grafton on day two of their showcase carnival. Further, he was brave in defeat, running second and producing a career peak figure behind a city-class galloper in Kokoro. The three-year-old gelding has a win at this track/distance, is suited to the drying track on the course proper and has a favourable map. Each-way.

Dangers: 17. Navajo Peak ran fast time, winning at Hawkesbury last start for his new trainer David Payne. The gelding had every chance, but all the merit was in the clock, and he ran the fastest final 200m split of the meeting in 11.37. He is rock-hard fit and brings the best last start figure into this event.

11. Recommendation is two from two in his first prep and has a positive racing style. Expect him to roll forward from the wide draw and give a sight. 16. Enjolras was honest first-up at Canterbury on a testing track. He will be fitter and extra distance suits. Add 18. Lohnraki to trifectas and first fours.

Forget 2. Star Sparks last start at Sandown Hillside 43 days ago, where he had multiple factors against and has since trialled well enough at Randwick on the synthetic track. Before that start, he was 36 days between runs and won easily at Hawkesbury, carrying a big weight. The gelding is relatively lightly raced, maps to control the pace and the drying track suits. Each-way.

Dangers: 7. I Want One has had excuses this prep, racing wide and striking very testing heavy tracks. He can bounce back into the winner’s stall with a soft draw, and jockey Brenton Advulla goes on. 3. Buba is a consistent type and is down in grade.

The five-year-old mare is rock-hard fit, receives a significant barrier change and gets in well at the weights after the claim for apprentice Jackson Searle. 4. Fanmalia is coming out of time/sectional merit races on the country circuit and deserves his shot at this level.

2. Belladeel resumes without an official trial but went out an impressive winner running a career peak figure at Newcastle before spelling. The six-year-old gelding ran his rivals ragged running strong sustained sectionals throughout and won by 5.5 lengths. First-up last preparation, he was unsuited over 900m but ran on strongly, recording the fastest final 600m/400m splits of the entire meeting in 33.32/22.58. He draws well to settle handy to the speed, and with even luck, expect him to hit the line hard.

Dangers: 8. Dijon sat outside the leader in an even tempo last start at Hawkesbury and sprinted hard, running one of the fastest final 400m sectionals of the entire meeting in 22.81. Additionally, he was brave in defeat, running second and beating the rest easily. The three-year-old gelding’s ratings profile suggests he’s ready to peak third-up and maps to have all favours.

3. Concocted raced wide without cover first-up at Gosford in a genuine tempo and battled on bravely to hold onto third placing. He will be fitter for that effort and expect him to roll forward again. 6. Reach For Gold has a starting price edge over some of his rivals and has a gear change. 1. Prince Invincible had the bias against last start and drops in grade.