Track soft 5/6 and rail out 4.5m so on-pace early before levelling out.

Tactical staying battle to start, although thin in depth. Coffs Harbour five-year-old 5. Takarakka looks the one to beat off his metro form in Brisbane winning a class 2 two runs back before a solid effort in a stronger BM70.
Dangers: Gold Coast-trained gelding 8. The Zoff only has a plain record, but attacked the line nicely in a BM70 last start and leading rider goes on from a good draw. Ballina-trained seven-year-old mare 2. I'll Miss You hasn't won for a while, but her first-up effort in stronger grade at Murwillumbah was good. Gets to her pet trip quickly, and finished a close third in the Lismore Cup in the spring. Goulburn gelding 4. Purrfect Trick has been up for a while, but looks ready for this longer trip after hitting the line from well back behind Chuck'n'paul this grade at Scone in what will likely be a good form race. Gold Coast eight-year-old 1. Meteorologist is having his 90th start, but proved he still has the will defying a betting drift to storm home and win a BM70 this track last start, but has to be a query under 62kg.
How to play it: Takarakka to win and first four 1-5-8/1-2-4-5-8. 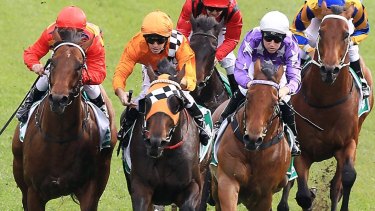 Hard graft: Racing is back at Grafton today.Credit:Jenny Evans

Debutante three-year-old Coffs Harbour gelding 2. Plonka (Epaulette x Loving New by Choctaw Ridge) looks well placed from the draw in a weak maiden, and with leading rider on. Trialled smartly at home late last year, and reportedly working well.
Dangers: Local gelding 10. Airdale is still searching for his first win after 23 starts, but last run here from off the speed was among his best, and gets a nice trailing draw to finish hard. Another first-starter, Lismore-trained three-year-old 1. Kalks (Testa Rossa x Diamond Tiara by More Than Ready), has also trialled nicely while big watch on local gelding 4. Celebration Day having his first run for 17 months with the blinkers on for the first time.
How to play it: Plonka to win and quinella 2 and 10.

Keen on consistent Kempsey filly 2. Campari Soda sneaking back in trip fourth-up. Has been right in the finish all three runs this prep without winning, but is ready to break through in what looks a weaker race.
Dangers: Coffs Harbour filly 9. Texas Target loomed to win last start this track, but just faltered under pressure late. Fit now, and while doesn't want it much further, this suits. Wauchope filly and first-starter 3. Friendly (Strategic Maneuver x Navarino Gold by Lionheart) should be in the finish after a nice trial and drawn to get a lovely run just behind the speed. Coffs Harbour filly 1. Tycoon Anna raced above market expectations on debut, but is up sharply in weight and trip while local mare 5. No Doubt A Lady has run four placings in seven starts, and resumed with a nice closing effort this track. Prepared to knock 7. Oyashio Drift.
How to play it: Campari Soda to win and quinella 2 and 9.

Murwillumbah-trained mare 3. Portuguese Tart just some needs some luck and early cover from the wide gate to finish over the top. Steamed home in a BM65 at the Gold Coast two runs back before another smart closing effort this track against stronger behind good galloper La Scopa.
Dangers: Lightly-raced Wauchope four-year-old 2. Phelpedo has found the line OK in his last two, and back slightly in grade looks well placed. Taree four-year-old 4. Gold Skye has been consistent enough this prep, but tackles stronger company here while 3kg claiming apprentice aboard 1. Follow On is significant. Raced against stronger last prep, although will need a stack of pace on up front to get over the top.
How to play it: Portuguese Tart to win.

Tricky affair at set weights over a middle distance, but like lightly-raced Coffs Harbour seven-year-old 5. Spender to break through fourth-up getting out in trip after attacking the line hard in last couple over 1400m.
Dangers: Four-year-old Murwillumbah mare 10. Ausfall looks a threat stepping up quickly in trip with 3kg weight claim for leading stable. Grafton gelding 6. There's Always One has been in and around the placings for some time without breaking through, and hard fit from a decent draw should be in the finish. Local mare 9. Anacreon improved getting out to the mile last start while locally-trained 11. Gold Digger should be included in exotics.
How to play it: Spender to win.

Five-year-old gelding 4. Dominant Crown will likely go back a long way back from the wide gate and up in weight, but can rattle home off what should be a strong speed. Good strike rate this track and trip, and flew home to win a BM82 over similar trip last start.
Dangers: Consistent Ballina eight-year-old 2. Hydrazine was well backed when finishing hard behind Dominant Crown. Hard fit now, and just needs to find cover from the wider barrier to run home. Taree flyer 1. Fuel can be hard to catch, but raced well in stronger metro company late last year, including front-running wins at Rosehill and Canterbury. Draws the fence for first-up assault, but has to cart a whopping 64kg. Eagle Farm-based entire 3. Wonder Boom raced against stronger earlier in the year, and looked sharp in a recent trial. Port Macquarie gelding 5. Patriot resumed with a fast-finishing win at home, and drops in weight, but this looks tougher while emerging Armidale filly 6. Rock The World looks the best of the rest.
How to play it: How to play it: Dominant Crown to win and first four 2-4/1-2-3-4-5-6.

Open and deep contest. Local six-year-old 9. Caro Cavallo gets back in his races, but can reel off a powerful last 400m. Has had two solid closing runs back from a spell, and gets to the right trip now third-up at big odds.
Dangers: Gold Coast-trained five-year-old 1. Fanx improved second-up to just miss in the heavy at Ipswich, and despite the big weight, will go forward and prove tough to run down. Armidale six-year-old 2. New Endeavour is consistent enough around this grade and trip, and draws to get a nice run. Taree five-year-old 3. Subtle Grey is another runner capable of a big finish. Won two back at Taree, and then charged late behind Lucciola Belle at Port Macquarie. Drawn wide, but with even luck will be powering home while four-year-old stablemate 4. Arugula can park right behind the speed from an inside draw and work into the finish.
How to play it: Caro Cavallo each way and and trifecta 1-3-9/1-2-3-4-9.

Open race, but local five-year-old gelding 2. Longtga can bounce back after blowing the start badly in a BM58 this track last start. Previous form was sound, and draws to get the right trail.
Dangers: Emerging Gold Coast filly 6. Raay Of Time has been rock solid in the market all three runs this prep, and broke through last start. Can go on with it now for leading trainer/rider combination. Local three-year-old 3. Wotsizname has promise, and improved third-up off a long break to easily win his maiden. Wide gate is the obvious concern, but has the quality. Doubt anything else can win the race.
How to play it: Longtga each way and box exacta 2-3-6.