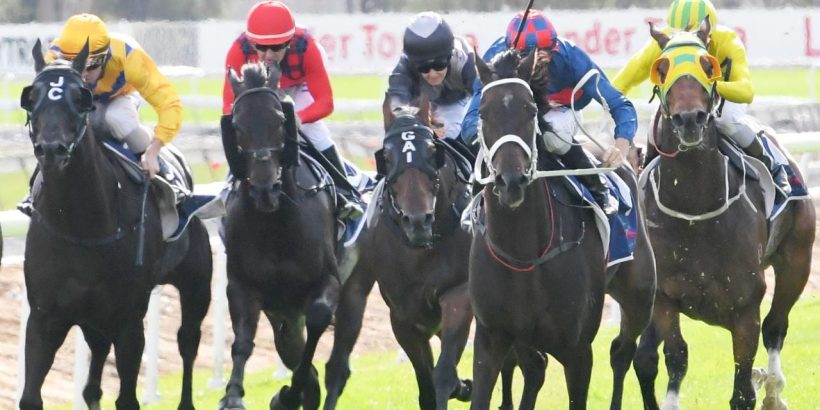 Form analyst Shayne O’Cass is confident a close relation to an international star by champion sire Snitzel can kick off his career with a debut win.

One of the best-bred colts in Australia; looks an above average type ‘later on’ but 1400m on debut is within his range.

Fitter for the return run at the midweeks, blinkers go on and gets to 1400m. No excuses. He ought to be winning.

Josh Parr has a number of good rides including Vyner at Hawkesbury. (Photo by Mark Evans/Getty Images)Source:Getty Images

Josh Parr has the ride on arguably the best horse that will come out of the meeting in Vyner.

Matthew Dunn trained filly who was tipped out after her narrow win on debut at Grafton on January 24. Trialled well and has Ben Looker on.

Ran well above market expectations on debut. Drew 1 that day and has the rails again for this one at her home track.

THE INSIDE MAIL FOR HAWKESBURY

Law Party was $2.70 first-up in a midweeker at Warwick Farm which was short enough given that he only had the one ‘easy’ trial. He ended up finishing fifth of the seven horses, it wasn’t a poor run by any means but in every way the run of a horse that would go a lot better at the next run and up in trip. That is here and Mark Newnham has taken the added insurance of ‘blinkers on’ for the first time. Gorshin is getting close now himself and is likewise going to eat-up the 1400m. Texcel has Ibaraki form, barrier 2 and Hugh Bowman again.

Light Up My World was given the perfect ride by Tim Clark at Wyong 19-days ago but he can thank Arc winning jockey, now Group 1 trainer Gary Moore, for the win given that he (Moore) found the best race imaginable for this genuinely progressive filly. Remus is a son of Golden Slipper winner Vancouver racing in the Signore Fox colours. He was beaten a neck here on debut then went to Bathurst and won his maiden with a lot of authority. Edge Of Darkness is a bit one-paced but he’ll be on speed and strong at the mile.

Trainer Gary Moore has Light Up The World ready to make it two in-a-row. (AAP Image/Simon Bullard) NO ARCHIVING, EDITORIAL USE ONLYSource:AAP

Vyner is arguably the most interesting horse racing all day by virtue of his pedigree alone. Long story short, he is bred to win a Derby, Cox Plate, Caulfield Cup but has the speed of Snitzel to balance up that stamina. Whatever happens next season, he should be at least able to ‘figure’ here one but over 1400m on a big track. Seda is another blueblood. She is a three-quarter to Bounding and a close relative of Anthony Van Dyck. Trials have been very good indeed and 1400m is the perfect trip to kick off at. Respecting the ‘raced’ Armour Force.

Pending is a grandson of Bob Thomsen’s mighty filly Slight Chance who won a total of six Group 1 races before going to stud and throwing a couple of stakes-winners including Dane Shadow. As for Pending, he is a Hobartville Stud bred gelding who handed in an encouraging debut when a closing third here 9-days ago over 1000m. Extra 100m is ideal. Charlemagne won’t stay a maiden long and has trialled up keenly. Sniper Legend deserves to have plenty of admirers off her debut at Wyong where she ran some ripper splits.

Lake Kastoria is a fascinating filly on debut here for Matthew Smith. Foaled in NZ, she is by Godolphin’s Ranvet and Chipping Norton winner Contributer but from a really fast and precocious two-year-old family. Her trial here on June 15 was outstanding. Market watch advised. Chalkley ran a huge race at $41 when finishing second to the exciting Team Hawkes galloper Ibaraki at Canterbury on June 9. Underrated type. You would have expected Tight Ropes to have won a race by now but that doesn’t’ mean this won’t be her first taste.

Gayna Williams has an exciting horse in Tags who was fourth on debut but unbeaten in his three subsequent runs. He was so impressive winning at home first-up running right over the top of Smuggler’s Bay who went into the race unbeaten. The thing about Tags is that he is untapped and none of us what his ceiling level may be. Command King generates some sizeable interest. The son of Epaulette has a record of four starts for two wins and two placings for Clare Cunningham bearing in mind this is his first one for John Thompson, Lord Zoulander has traditionally raced well here at Hawkesbury.

Man Of Sinn has to do a Glastonbury here; well, he is a grey so that is a good start. He is looking a bit dour these days which is in keeping with his pedigree but now that he gets to 1800m, he just has to start doing something. This is a good race for the Waller/Bowman charge, certainly there for anyone’s taking. Bob (2nd), My Girl Ruby (3rd) and Karmazone (5th) all come through the same 1900m Bm64 race run here on June 13. Local Hendo’s Magic ran a massive race at the midweeks.

Bet: Man Of Sinn to win, Bob to place