There is doubt over whether racing will continue after the last two races at Warwick Farm were called on Wednesday following a COVID-19 scare involving a Melbourne jockey.

The jockey, who rode at Rosehill on Saturday, took a commercial flight a fortnight ago, which had someone on it who has tested positive for coronavirus. 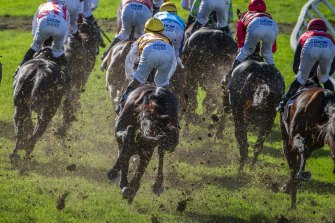 Racing could be shut down after a jockey was exposed to a case of COVID-19 on a domestic flight.Credit:AAP

It happened before racing authorities banned jockeys from flying commercially. He was on the private plane with 10 jockeys, including Hugh Bowman and Tommy Berry, who came from Melbourne to Sydney for the Golden Slipper meeting.

The jockey has been tested and caused racing in Victoria to be shut down until Friday.

"The participant has, this afternoon, been advised by health authorities that they were on the same flight as a confirmed case of COVID-19 when they travelled on 12 March 2020 prior to the introduction of strict COVID-19 protocols governing the conduct of racing in Victoria and the federal government’s announcements of 13 March 2020 restricting social gatherings," a Racing Victoria statement read.

Racing Victoria chief executive Giles Thompson said the jockey had not shown any symptoms since the flight.

"On that flight, another passenger, completely unrelated, has since been confirmed as a case of COVID-19 and therefore, as a result, the protocols we had in place had to kick in and we have abandoned this afternoon's meeting at Sandown after race two and abandoned tomorrow's meetings at Kilgore and Pakenham," he said.

He added he was "hopeful" racing of a quick return.

"We've been spending a lot of time putting protocols in place and educating the participants. The participant has done exactly the right thing and we've been notified and everything we've put in place has swung into action," he said.

"The whole point of these protocols is to try and keep racing going as long as possible, prevent potential exposures, and when you do have a potential exposure to be able to contact the trace as quickly as possible and identify whether there are others who have been exposed and deal with that as well. Unfortunately, this potential exposure happened before those protocols were put in place, it was 13 days ago, and this participant, just to reiterate, is not displaying any symptoms of COVID-19."

It came shortly after a Penrith harness racing official tested positive for COVID-19, which has seen the trots shut down indefinitely in NSW, Victoria and Western Australia.

Harness Racing NSW is waiting on a COVID-19 test results from a steward, who had direct contact with the infected official.