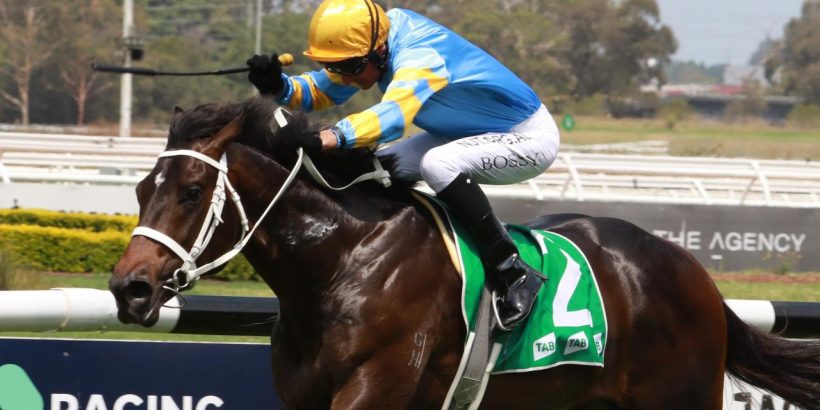 Ron Dufficy: Verne has impressed me in his two starts to date and I just feel he is top pick in a very tough race to start the day. In The Congo did plenty of work and held off Verne on debut so he fits in well again. Park Avenue has won twice on soft tracks which puts him right in the mix. Sacred Field wasn’t disgraced when a beaten favourite on debut, he was still a bit raw that day and barrier one is a big help to his chances.

Ray Thomas: This is an intriguing juvenile opener. I have the two unbeaten youngsters, Park Avenue and In The Congo fighting out the finish. Slight preference to Park Avenue who has a strong finishing burst and should enjoy getting out to 1200m. I concede Verne will be hard to beat and I’m expecting Sacred Field to be very competitive.

From the Golden Slipper to the championships, Sky News takes a look back at the wonder of the Autumn Racing Carnival….

From the Golden Slipper to the championships, Sky News takes a look back at the wonder of the Autumn Racing Carnival.

Dufficy: Impossible race. I’m leaning Cecilia’s way. She is racing honestly, finds a good spot in the run from her favourable draw and has nice wet track form. Tipping Point is a young horse learning all the time and won’t be far away from the finish again. Statesville has a tough task from that draw but he is a winning chance with any luck. Charvet has found winning form and might have more upside than most.

Thomas: Agree, Ronnie, this is a very open race. Casino Kid is a good each way bet here. He’s racing well, will run this trip right out, handles wet tracks, and is drawn to settle in the front half of the field where he will be poised to strike from the turn. Tipping Point should be very competitive and Mr Wong will be powering home. Statesville has drawn off the track but, as you pointed out, with even luck in running he is more than capable of running well.

Dufficy: Hulk is back to 1000m but there is plenty of speed up front and with the wet track that should help his cause. Our Bellagio Miss is a capable mare fresh and gets in very light with Reece Jones’s claim. Ice In Vancouver is a talented country sprinter who gets his chance to shine although the query is his lack of wet track form. Malkovich is back to 1000m which suits and will give them something to chase.

Thomas: Ice In Vancouver is very promising but this is his biggest test. He is untried on a heavy track but I’m banking on his raw ability to get the job done. De Grawin was disappointing first-up but she is a smart mare suited back to 1000m and on a wet track. The speedy Malkovich is race fit and will be in front for a long way. Our Bellagio Miss is well-weighted after the claim, and likes this track and distance.

Dufficy: It’s hard to get away from Gravina, Ray. She won as easy as you like last start and only has to reproduce that form to win again. Steel Diamond is having her first start for the Chris Waller stable and the wet track is no issue for her. Shaik won on a soft 7 at the end of last preparation and she drops in class after her first-up run in Queensland. I want to forgive Mollycoddle after a slow start last time and her previous form suggests she is over the odds.

Thomas: Godolphin can quinella this race with Gravina and Mollycoddle. Gravina has to be top pick after her arrogant last start win. She is flying. Mollycoddle is over the odds. She ran well below her best last start but her form prior to that is hard to fault and she deserves another chance. Switched is another at very generous odds and Belluci Babe is always very competitive.

Dufficy: Zing is on a quick back-up with her third run this preparation and the Randwick mile on a soft track is her go. She should be hard to beat. Her main danger could be the Victorian raider La Chevalee. She makes her own luck, has very good wet track form and is ready to win. Snippy Fox tries very hard and deserves another win. Ruby Tuesday is racing well and the claim helps.

Thomas: I’ve also got Zing clearly on top. She is working up to a win and this race suits perfectly. Ruby Tuesday has had excuses at her last two starts and she will run well here. I’m also wary of La Chevalee who is peaking after recent racing. Betty Blooms is an underrated mare racing in top form and she is a knockout chance.

Dufficy: Brutality wasn’t suited back in distance last start but the softer track and back to a mile plays right into his hands. Order Again has been kept fresh with a recent trial and has the ideal conditions here. Kirwan’s Lane may have been flattered by a brilliant ride last start but the gap to third suggests it was good form. Dealmaker loves the Randwick mile and has claims.

Thomas: I’ve gone the other way, Ronnie, with Order Again to beat Brutality. Order Again should have won the Scone Cup first-up, he’s a very good wet-tracker and the Randwick mile suits. Brutality is ready to win. This race does look ideal and with even luck in running he has to be in the finish. Royal Celebration is genuine but finding it hard to win. Kirwan’s Lane is in top form and is going to get the run of the race.

Brutality is suited stepping back up to the mile and a soft track. Picture: Getty ImagesSource:Getty Images

Dufficy: This is an even race. Fituese has trialled nicely since her first-up run and she gets another chance as she is much fitter here. Wandabaa gets the softer track which is the key to her chances. Adelong is a track and distance specialist, and she will look the winner for a long way riding the speed. Ballistic Lover ran very fast time winning last start but gets to this level very quickly.

Thomas: Ballistic Lover was very impressive winning the Ortensia Stakes last start. Majestic Shot, the runner-up that day, won well last week to frank the form. This is tougher but Ballistic Lover is a progressive filly in the zone. Wandabaa is bursting to win a race and this suits, particularly given the heavy track conditions. Surreal Step was unlucky not to have won last start and appeals as a very good each way chance. Viridine is a top class sprinter who rates as a genuine contender.

Dufficy: I like Tricky Gal. She is a Group-class mare who has been kept fresh with a nice trial, the soft track suits and she is a good chance at odds. True Detective had to go forward from a wide draw last start which is not his style of race but he is well placed here. Grand Piano appears to be working back into form and New Arrangement has the big weight pull and could surprise fresh.

Thomas: Dream Circle is in career-best form. He has really attacked the line to win both starts this campaign and he is very effective on wet tracks. Enchanted Heart won the Takeover Target Stakes two starts back and she is another suited by the heavy track. Tricky Gal will be finishing hard and True Detective is also in the mix.

Dufficy: I’m really keen on Blondeau. I love the set-up of this race for him, the 1400m on a wet track suggests to me he will be very hard to beat with any luck. Canasta will give a good sight up front and rarely runs a bad race. Regal Stage has recorded three of his six career wins when fresh so he has to be respected. Cisco Bay is another wet-tracker who is trialling very well.

Thomas: Blondeau has returned in very good touch this campaign and he does handle wet tracks. He will enjoy getting out to 1400m and is the one to beat. Cinquedea should be at his peak after two runs from a spell and is over the odds. Canasta will be in this race for a long way while Regal Stage is primed to sprint well fresh.

Dufficy: If Converge runs up to his Sires’ run then he is the horse to beat. He got back that day, had to go around them and finished off really well after a five week freshen from the Champagne Stakes in Sydney. If he reproduces that effort he will be very hard to beat. Port Louis finished alongside Converge in the Sires’ and this has been a target race for him. Subterranean is a chance at odds and Tiger Of Malay won the Sires and just has to run the mile.

Thomas: Converge’s finishing effort was unbelievable in the Sires’. He’s drawn to advantage this time, will settle in a forward position and will run a strongly 1600m. Tiger Of Malay is a classy youngster with impressive acceleration. Port Louis will be running on and the unbeaten Cape Breton stays under notice.

Dufficy: In a wide race I’m thinking Victorem is peaking at the right time. I like his chances at odds. He never really balanced up last start but caught the eye as he looked amazing in the yard. He is going to run well. The danger could well be Subpoenaed. I know she has a wide barrier to overcome but she worked well between races last week and this looks a typical Chris Waller plan to get her nice and fresh. She is brilliant on her day. I Am Superman will land in a beautiful spot here from his good draw and gets his preferred dry track. Tofane is getting back to form and has a big weight drop.

Thomas: Wild Planet finished powerfully to just miss running down Eduardo in the Doomben 10,000. It was a super return by Wild Planet and sets him up well for the Stradbroke. He has to overcome an awkward draw but with even luck in running he is the one to beat. Victorem also comes off an eye-catching Group 1 effort when fifth in the Kingsford-Smith Cup and he will be very competitive. I Am Superman gets the run of the race and is a good each way chance. Vega One unleashed late to win the Kingsford-Smith Cup and rates among the main contenders.

First starter by the T.J. Smith Stakes winner Tivaci out of a Group 3 winning racemare. Ran fifth in her trial but was the standout performer.

Ryan/Alexiou filly who turned in some eye-catching runs at her first campaign. Made ground in Ibaraki’s heat eight days ago.

Gwenda Markwell trained son of a Kentucky Derby winner who sent out the right signs with that closing third at Kembla over 1400m. Step sup to the mile on Saturday.

Alysha Collett is one away from 500 wins and with such a grand book of rides, she should get there easily.

Remains a maiden after 19 starts but she had a fair few ‘good races’ and she is way down in class.

Hard to believe she is still without a win after 18 starts but that happens with her get back/run on style of racing.

Handy mare who races well at home and has mixed and matched in better races than this at times.