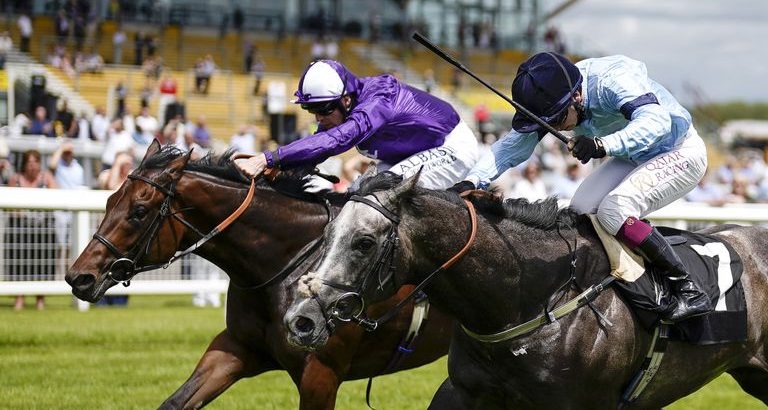 Great Max appears to have earned himself a last-minute ticket to Royal Ascot after making a winning debut for Michael Bell at Newbury.

A 260,000 guineas yearling purchase for owners Amo Racing Limited, the Wootton Bassett colt was a 4-1 shot for his racecourse introduction over six and a half furlongs in Berkshire.

Having been ridden prominently throughout, Jack Mitchell’s mount displayed a smart change of gear to get up and beat the wayward Harrow by three-quarters of a length – setting up an intended tilt at the Chesham Stakes on Saturday week.

Winning trainer Michael Bell said: “He’s been working well at home and we were hopeful that he could do something like that.

“Provided he takes the race all right and eats up and trains well next week, he’ll run in the Chesham.

“There haven’t been many suitable maidens to run him in, but we’d had this plan in mind for a while.

“Phase one has gone according to plan, so if all goes well for the next week, we’ll head for Ascot.”

3.40 Wednesday – The Prince of Wales’s Stakes

Sylvester Kirk admitted relief was his overriding emotion after Seattle Rock (5-2) made the most of having her sights lowered in division one of the Betfair British EBF Fillies’ Novice Stakes.

The daughter of Fastnet Rock was placed in the Chesham at Ascot, the Sweet Solera at Newmarket and the Prestige Stakes at Goodwood as a juvenile last season. Having also been set two demanding tests this spring – finishing down the field in the Nell Gwyn and the 1000 Guineas at Newmarket – Seattle Rock had far less on her plate at Newbury and duly opened her account with a two-length verdict under Ryan Moore.

“You always worry when you’re taking a filly that’s been highly tried with decent form and a reasonable mark back into a maiden or a novice, so it’s nice the way she’s done it.

“It’s especially good that she’s done it over a mile because her form is obviously better over shorter.”

He added: “It will be interesting to see how the handicapper assesses the form. Ryan was reasonably complimentary about her, so we’ll sit down with Jeff (Smith, owner) and work out a plan from here on.

“She has nice black type already and it’s nice to get the maiden tag off her.”

Division two was a much closer run affair, with the William Haggas-trained Evident Beauty and Tom Marquand getting the better of fellow 5-2 joint-favourite Subtle Beauty by a neck.