The appetiser to one of the most anticipated spring carnivals will be delivered on Saturday and atop the platter sits boom horse Russian Camelot.

Not in a long time has there been as much hype around a five-start horse heading into a spring as there has been on Danny O'Brien's group 1-winning colt. 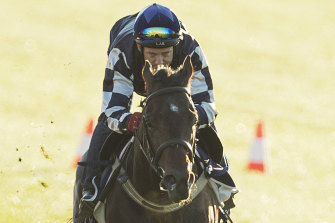 Some of O'Brien's greatest victories have come from horses who have flown under the radar and exploded on the biggest stage, as Vow And Declare did in last year's Melbourne Cup and Shamus Award did in the 2013 Cox Plate.

Perhaps Blue Diamond winner Star Witness came into his three-year-old campaign with a weight of internal expectation, but O'Brien says the public interest in Russian Camelot is unlike anything he can recall.

"I don't think there have been too many springs where a horse has only run five times and is generating as much hype as what Russian Camelot is," he said.

"It's definitely a different thing for us. [Star Witness was a] similar style of [pressure] but he had nowhere near the public hype that this horse has got." 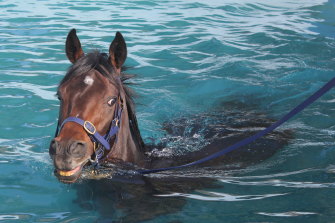 Russian Camelot has a swim at Flemington.

Whether the spring culminates in a Cox Plate or one of the Cups, only Russian Camelot can dictate that in his first two runs this campaign.

But O'Brien has a stable of stars that stretches beyond one horse. Cup winner Vow And Declare and Oaks winner Miami Bound will also run in Saturday's Makybe Diva, King Of Leogrance carries Melbourne Cup expectations and Flying Award is one of the leading Caulfield Guineas hopes.

A life-changing Melbourne Cup has only enhanced the ammunition at O'Brien's disposal.

"It's a great experience [winning a Melbourne Cup]; it's way beyond any other race as far as how much it means to win it and how many people get great joy out of you winning it," he said.

"Certainly we've got some really nice horses that have joined us over the last 12 months.

"We've been pretty keen not to increase the footprint too big. We're just really conscious of moving on the bottom end of the stable as quickly as possible and not trying to get to numbers that are just unmanageable."

The stable's capacity sits at 125. Fifty boxes at each of Flemington and Barwon Heads is a nice spread for O'Brien, who recently took up another 25 boxes at Geelong where he can give his two-year-olds at-the-track experience.

Last season the team achieved a key milestone of 100 winners and it's a target O'Brien would like to reach again, but most of his energy is going into winning racing's feature races. Saturday is the launching pad for three of those big guns.

"We're feeling good and it's only the beginning for us," he said.

"This is all about preparing them for later in the spring, albeit we'd love to win and certainly with Russian Camelot being a colt we'd like to see him go to the races and hopefully win every time he goes around.

Few horses, bar perhaps Makybe Diva, who ironically Saturday's race is named after, are capable of winning at both a mile and 2400 metres at the elite level and O'Brien says a loss on Saturday won't end the world.

"From what we’ve seen so far, his best performance was the South Australian Derby when he got to 2500 metres. It’s hard to win a group 1 mile and a group 1 mile-and-a-half race. There’s not many good horses that can do that; Winx didn’t even do that."

B1G, MAC and a Mountain of Easy Mac? The Bottom 10 will take them all!