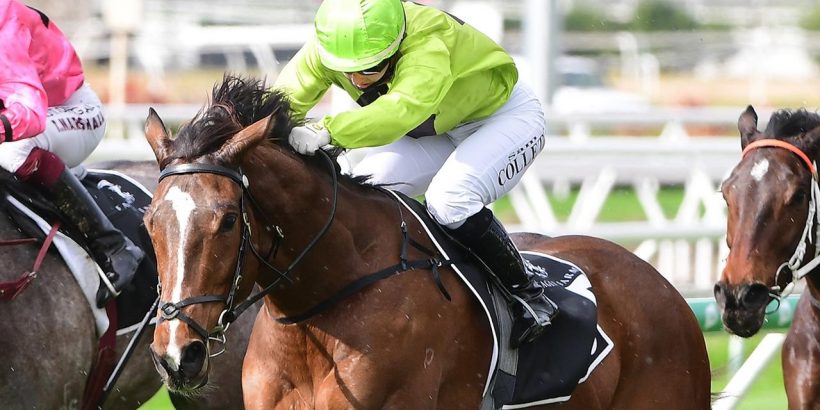 Gun Kiwi jockey Samantha Collett will have her cousin Jason to thank if she takes out the Group 3 Winx Guineas aboard Meg at the Sunshine Coast on Saturday after the Sydney hoop helped get her the ride following news of the Australia-New Zealand bubble closure.

Collett was booked to fly home to New Zealand on Saturday following Coventina Bay’s midfield finish in the Group 1 Tattersall’s Tiara but with lockdowns breaking out across Australia she was forced to stay Down Under.

While Brisbane’s lockdown has limited her movements, it didn’t stop her booting home her first Australian winner at Eagle Farm on Wednesday aboard Thatfridayfeeling for trainer Michael Lakey.

“I am one of you guys now, hopefully it isn’t for too long,” she laughed.

“It has been good actually, I am not complaining.

“It was nice to get a winner the other day and hopefully I can get a few more on Saturday.

“I am not really doing much if I am totally honest with you, it is a bit of a working holiday.

“It forced me to stay here a little bit longer but as it has worked out, I don’t have a whole lot to go home to at the moment, it is very quiet there in a racing sense so I haven’t booked a ticket home at this stage.”

A message from cousin Jason – who she was set to ride against in the Tatt’s Tiara last week before Sydney jockeys were banned from Queensland – landed her the ride aboard the Matthew Dale-trained filly.

“He just gave my number to the trainer, he messaged me asking if I had a ride in the Guineas and I didn’t so that’s how it happened,” she said.

“I rode a little bit for the owner back home actually so it’s quite cool to be riding for him on Saturday, it’s a shame he won’t be able to be there.”

With Coventina Bay also entered to go around again in the Listed Glasshouse Handicap (1400m), Collett is looking to make the most of the situation, revealing she could hang around in Australia a bit longer.

“Originally my mare was just running in the Tiara and then heading home but then they decided to run again and the travel bubble got paused with all the lockdowns going on,” she said.

“I will probably stay here a little bit longer, I might head up to Rockhampton next week for a ride up there which will be cool.