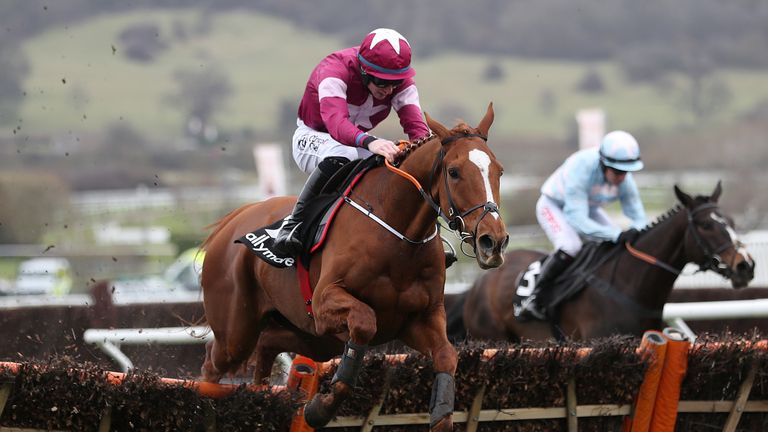 Samcro will face just three rivals when he makes his eagerly-anticipated return in the WKD Hurdle at Down Royal on Friday.

The six-year-old was the undoubted star novice hurdler of last season, winning each of his first four starts, including the Deloitte Novice Hurdle at Leopardstown and the Ballymore Novices’ Hurdle at the Cheltenham Festival.

Having fallen on his final outing of the campaign when stepping out of novice company for the Punchestown Champion Hurdle, connections have taken their time in deciding whether to remain over the smaller obstacles this term or pursue a career over fences.

However, it was confirmed earlier in the week he would remain over timber with a view to having a crack at the Champion Hurdle at Cheltenham in March.

Explaining the decision, Elliott told Betfair: “I’m under no illusions about the challenge that he faces, but he was a top-class novice hurdler last season and the race he won at Cheltenham has produced a number of previous champion hurdlers in Faugheen, Hardy Eustace and Istabraq.

“Samcro has a long way to go to be mentioned in the same breath as them but he’s done absolutely everything that we have asked of him so far and I’m hoping that there’s more to come.

“We’ll get Friday out of the way first and we’ll just taken things race by race, but he’ll follow a traditional sort of path to Cheltenham.”

Samcro is the clear favourite at 11-4 for the Champion Hurdle, ahead of dual winner Buveur D’Air at 7-2, and he will be a warm order to make a successful reappearance. He may not have it all his own way, however.

The Willie Mullins-trained Sharjah Galway Hurdle hero Sharjah is rated just 5lb inferior to the Elliott star and the conditions of this Grade Two contest mean he is in receipt of 8lb.

He returns to the jumping game race-fit following a couple of admittedly disappointing efforts on the level at Leopardstown and in the Irish Cesarewitch at Navan.

“We are going to Down Royal with him on Friday. He is fit and well and we are looking forward to getting him back over hurdles,” Mullins said during a press visit at his yard on Wednesday.

Jardine said: “I think he deserves his chance. It’s not going to be easy against a horse like Samcro, obviously, but our horse is in good order and we’ll give it a go and see what happens.

“He’s a bit high in the weights to be running in handicaps, so there aren’t that many options for him.

“He’s a good horse, whether he’s as good as Samcro or not I don’t know, but I’m sure he’ll run his race and hopefully he’ll go well.”

The quartet is completed by Stuart Crawford’s Schmidt, who looks to have plenty to find.