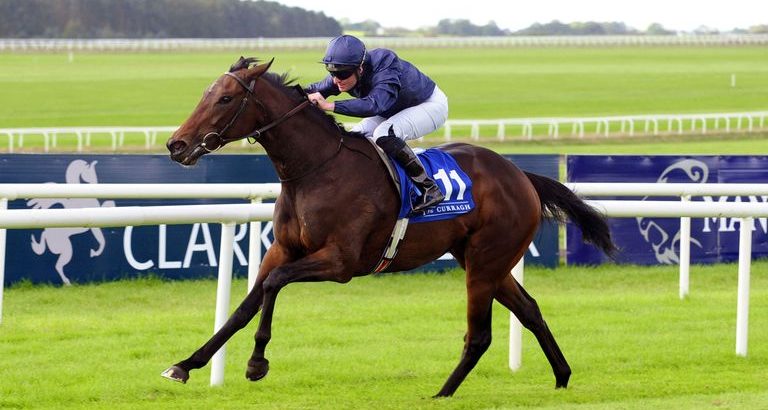 Curragh maiden winner Santa Barbara has been propelled into Qipco 1000 Guineas favouritism on the back of some bullish comments by Aidan O’Brien.

A half-sister to Iridessa, trained to Group One glory by O’Brien’s son Joseph, Santa Barbara won her only race to date by two and a half lengths last September.

O’Brien described her as “looking like a five-year-old colt”, adding that she has been toying with her work companions.

Speaking in a stable tour on Attheraces.com, he said: “She’s done unbelievably well in physical terms over the winter. She looks like a five-year-old colt. She goes through her work unbelievably well. She shows loads of speed and always worked with an awful lot of class.

“Whether we start her in the Guineas trial at Leopardstown or go straight to the 1000 Guineas at Newmarket, we haven’t decided yet. We won’t over-race her, we’ll keep her runs to a minimum if we can, but she shows an unbelievable amount of class at home.

“In terms of her stamina, she’s by Camelot, so that will give her a chance to stay a mile and a quarter or maybe further, but she does show a lot of pace. She looked very pacey on her debut and she does that at home all the time. She just toys with horses in her work. We’re very excited by her.”

One horse likely to skip the Newmarket Guineas is High Definition, with O’Brien favouring a Derby trial at this stage.

“He’s going very well and doing everything right. He was big and babyish last year, so we had always planned to only run him twice as a two-year-old,” he said.

“He’s forward and will be ready to start in a Derby trial. We were thinking about potentially going to the 2000 Guineas first with him, but we have plenty for that, so we are leaning towards the Derby trial route with him now. There’s no doubt that better ground will suit him.”

Instead Battleground could travel to Newmarket, following his meritorious run to be second at the Breeders’ Cup.

“We are very happy with him. He was always a big horse, but he’s really after filling out over the winter,” said O’Brien, who had initially mooted Royal Ascot could have been Battleground’s starting point.

“It looks like he’ll go straight to the 2000 Guineas at Newmarket. He doesn’t strike me as one that will want much further than a mile, but I couldn’t completely rule it out – because we did end up going a mile-and-a-quarter with another War Front in Declaration Of War.”

O’Brien has a stranglehold on the betting for the 2000 Guineas, with Dewhurst one-two St Mark’s Basilica and Wembley single-figure prices as well.

Of the Dewhurst winner St Mark’s Basilica, he said: “He’s in good order, and we’re happy with how he progressed over the winter. The plan is to go straight to the 2000 Guineas at Newmarket with him.”

Wembley is also set to head straight for the same target.

O’Brien’s star in the older horse ranks is undoubtedly dual Classic winner Love, who was imperious last season before being ruled out of the Prix de l’Arc de Triomphe because testing ground.

“She’s in great order. She has done plenty of work and is good and forward,” he said.

“She’ll be ready to start whenever we want her. Though, those Listed and Group races leading up to the Tattersalls Gold Cup can often be run on bad ground – and ideally we wouldn’t like to ask her to start off on that sort of surface.

“If need be, she’ll have a few away days to get ready for the Tattersalls Gold Cup – but however we get there, that’s our first big target with her. I’d imagine she’ll campaign over a mile-and-a-quarter and a mile-and-a-half.

“She is just very natural. She is only half-speeding with her work companions, really. She finds it all very easy. We’re very excited about getting her back to the track.”