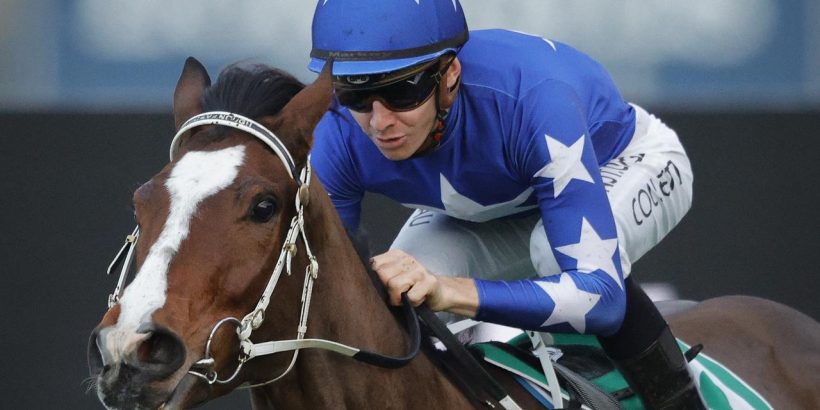 Rising star Fender could potentially have been contesting the $500,000 Country Championships Final at Randwick on Saturday but Scone trainer Brett Cavanough has bigger fish to fry including the dream of Queensland’s Group 1 Stradbroke Handicap.

Fender – a winner of four races from just seven starts – has been sent to the Sunshine State to race at Doomben on Saturday in the first plank of a northern campaign which has some lofty goals.

Fender is currently a 77-rater and Cavanough knows he needs to string together some wins to jolt his rating upward and be any chance of launching a Stradbroke assault.

However Cavanough has high hopes for the Toronado four-year-old who he rates alongside his unbeaten stable star It’s Me in terms of ability and future potential.

“He is going to Queensland to climb the ladder, how far up the ladder he will get I don’t know,” Cavanough said.

“The Stradbroke is a bit of a theory we have, he is a long way from a Stradbroke at the moment but he did run very well in the Theo Marks (less than three lengths off the likes of Wild Planet and Funstar).

“This horse won four straight last prep and he has probably got to win two or three straight this time to be thinking seriously about a Stradbroke.

“We have to get his rating up.

“If he wins on Saturday, that probably takes him into the 80s and then he probably has got to go to a stakes race and get into the 90s and then maybe who knows.

“He is definitely a carnival horse of some sort.”

Brett Cavanough is hoping Fender can “climb the ladder” in Brisbane. Picture: AAPSource:AAP

Fender will have his first interstate run on Saturday in the Benchmark 78 Handicap (1200m) at Doomben where he is rated a $4.40 chance to resume with a win.

Ryan Maloney will be legged up for the second time on Fender after riding him at the end of the galloper’s last campaign when unplaced on a bog track at Rosehill last October.

Cavanough, who raced The Monstar in the 2017 Stradbroke, holds high hopes Fender can sparkle in Queensland.

“His work is very similar to that of It’s Me and both horses can peel off some pretty good sectionals, there’s not a lot between them at home,” Cavanough said.

“The owners were not desperate to run in the Country Championships, they just want to have some fun with this horse and see where he can get to.”

Cavanough, a regular visitor to the winter carnival, plans to establish a temporary base in south-east Queensland during the carnival.

“I want a base to rotate horses through Queensland (during the carnival),” Cavanough said.

“I will probably take up about eight or ten horses, two and three year-olds mainly, and find out how good they are.”

Cavanough’s impressive three-year-old colt Pinnacle Prince had been entered to resume in a 3YO Handicap at Doomben on Saturday but won’t take his place after drawing the outside barrier 11.